Excessive and inappropriate speeding is one of the main contributors to avoidable collisions that result in death or serious injury. 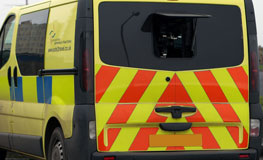 Speeding is an emotive issue for many Lancashire residents and is among the most popular problems to be set as a priority for local policing teams.

The force conducts daily speed checks across the county as well as enforcing fixed, mobile and average speed cameras.

Anyone caught speeding by an Officer could be issued a TOR (Traffic Offence Report), resulting in a conditional offer of fixed penalty which is currently £100 and three points on their licence or if eligible receive a speed awareness course offer as an alternative to prosecution. Motorists detected driving at high speeds will be referred to the Magistrates’ Court.

A notice of intended prosecution will be sent to the last known keeper for vehicles detected exceeding the speed limit by a camera and once an admission to driving has been submitted the above options will also apply.

As of the 6th April 2015 the speed limits for each vehicle type are:

If drawing a trailer these limits may be reduced for more details visit - www.gov.uk/rules-drivers-motorcyclists-89-to-102/vehicle-towing-and-loading-98

A seat belt can mean the difference between life and death, putting on your seat belt should be part of your routine before even starting your car and drivers should be responsible for ensuring all passengers wear their seat belt or suitable restraints.

We regularly catch people using a hand-held mobile phone while driving. It only takes a few seconds distraction from a mobile to cause a collision, which can have fatal consequences. Roads can be a dangerous place when the law is not respected and adhered to. If we are to reduce the number of fatalities and casualties on the county’s roads it is vital people comply with the law.

It is illegal to use a mobile phone held in the hand while driving or while stopped with the engine on.

It has been illegal to use a hand held mobile phone while driving since December 2003.

If you break this law, even if you are otherwise driving safely, you could face a fine of £200 fine and six points on your licence.

You may be required to appear in court if you refuse to accept the conditional offer of a fixed penalty and if the Officer believes the circumstances are so dangerous a fixed penalty is inadequate we may refer the matter directly to the Magistrates’ court.

If you go to court, fines will almost certainly be larger and disqualification is possible -

A fine must not exceed the statutory limit. Where this is expressed in terms of a ‘level’ the maximums are:

Fines can be much greater, and prison becomes almost certain if a death is caused.

Be Phone Smart from the RAC