Net closes in on organised crime... 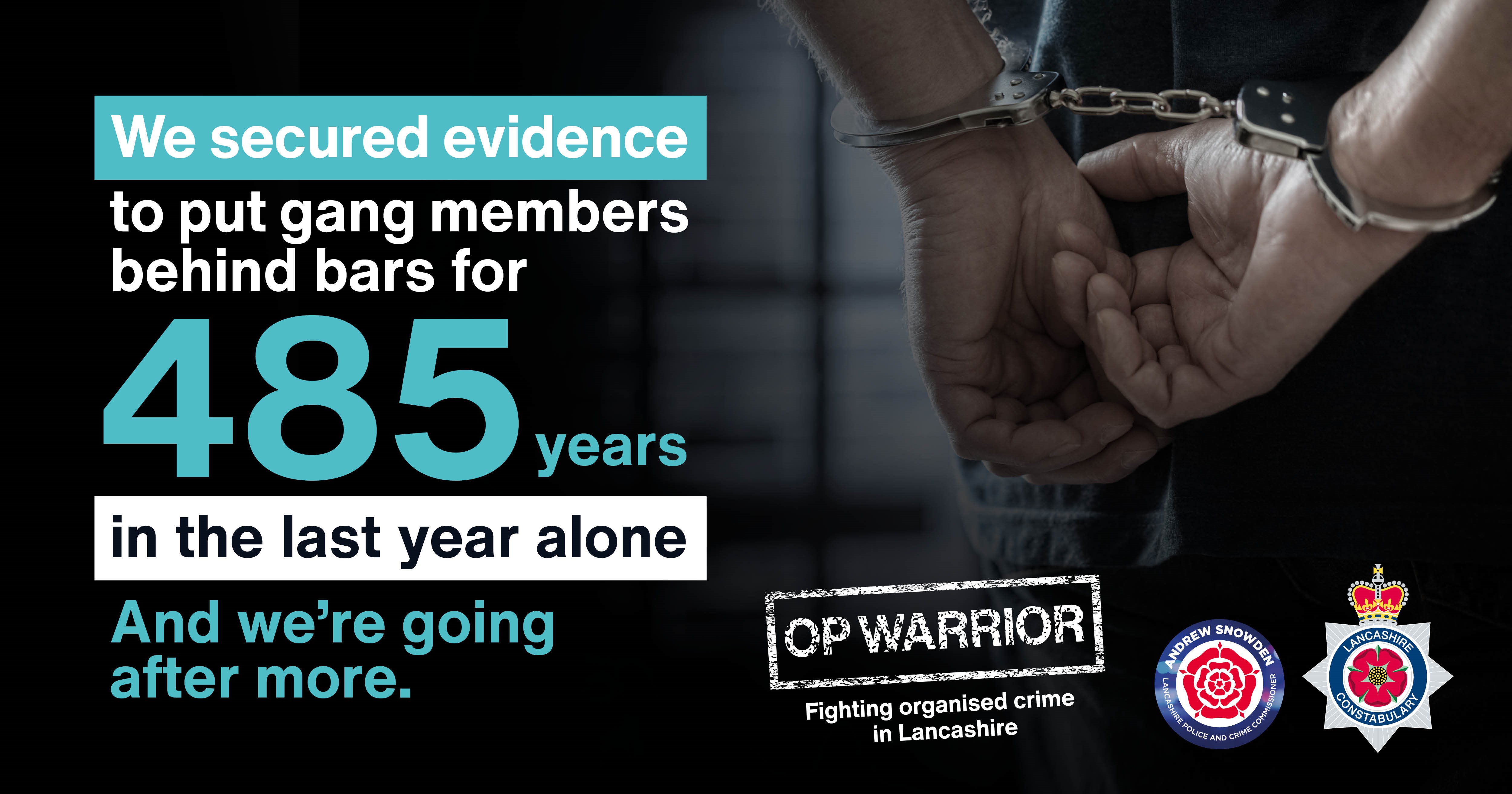 The net is closing in on organised crime in Lancashire, thanks to a county-wide crime crackdown codenamed Operation Warrior.

Not only are warrants and arrests taking place on a weekly basis, but a high profile advertising campaign has led to more information coming in from members of the public, leaving no place to hide for offenders.

Warrior is a force wide operation delivering on Lancashire's Police and Crime Commissioner Andrew Snowden's Fighting Crime Plan priority of disrupting and dismantling organised crime.  The operation is dedicated to bringing more offenders to justice as well as stripping them of their cash, cars and other assets.

In the last three months alone, Op Warrior has led to 277 arrests, 88 charges, 186 other interventions, 20 cash seizures and 60 years imprisonment for offenders.

Operation Warrior targets both individuals and gangs involved in crime, as well as associated issues such as violence and intimidation, large scale drug supply, exploitation and fraud, all of which can cause serious harm to local communities.

Police activity, coupled with a high profile leaflet, radio and billboard campaign, has seen an increase in information being passed to Police, all of which will help to bring more offenders to justice.

“Here in Lancashire, we’re taking a very proactive approach to tackling the issue. Every week we’re arresting an average of 17 people for organised crime and each month we’re seizing over £55,000 of cash along with other assets like drugs and cash.

“We’re making sure this message is getting out to local communities and as a result, we’re starting to see an increase in intelligence coming into us. This is great because it provides more opportunity to target offenders and more chance of them being caught.

“We are focussing on a significant amount of activity across the county and Operation Warrior is helping to ensure the net is closing in on organised crime in Lancashire.”

He appealed for the public’s continued support, saying: “Nobody knows their local communities better than the people who live here. I would appeal for anyone with any suspicions, to contact us or to call independent charity Crimestoppers anonymously. Even the tiniest bit of information might be the final piece of evidence we need to take action.”

Lancashire Police and Crime Commissioner, Andrew Snowden said: “Information from residents is vital in our fight against organised crime and I'm really happy to see an increase in community intelligence which means that our campaign is working.

"Organised crime gangs bring fear, violence, drugs and exploitation into our communities which is why I have made disrupting and dismantling organised crime a key priority in my Police and Crime Plan.

“It’s fantastic to see the Constabulary deliver on this priority through Op Warrior and the continued results in terms of arrests, asset seizures and drugs taken off our streets speak for themselves.

"I would encourage anyone to report suspicious activity or any information that might help in bringing criminals to justice.”

Police are still appealing for anyone with information about organised crime to contact them or independent charity Crimestoppers anonymously. Information leading to an arrest could lead to a reward of up to £1,000.

- Trafficking - A sign that it is occurring could be a house being used by a large group of people or people calling at the house at all times of the day.
- Drugs supply – This often involves exploitation of the vulnerable and violence in local communities.
- Cyber crime – Fraudulent emails or phishing scams with the aim of getting personal details are often distributed by organised crime groups.
- Businesses crime – This can range from “chop shops” dismantling stolen cars for spare parts right through to businesses being used for money laundering.