EVOFIT: Do you recognise this man? 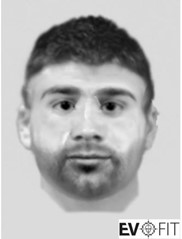 Do you know this man?

We want to speak to him after an attempted rape in Preston city centre earlier this month.

The victim, a man in his early 20s, was in Winkley Square on Saturday, January 7th when a man tried to sexually assault him.

The incident happened between 10pm and 12 midnight.

The offender is described as white, 5ft 8”, round face, small amount of stubble, eyes close together, short dark hair, mid 20’s, average build. He was wearing a black jacket with a zip up the front and elasticated cuffs, a plain black t-shirt, dark jeans, black shoes. He spoke with a Preston accent.

Det Con Ste Rotherham, of South CID, said: “This was a very serious offence which has left the victim extremely distressed and I would appeal to anyone who recognises the individual in the image to come forward and speak to police.”

Anyone with information should call us on 101 quoting log 0015 of January 8th. Alternatively contact independent charity Crimestoppers on 0800 555 111.