East Lancs crime group jailed for more than 70 years and £725,000 clawed back

Members of an organised crime group (OCG) who ran a multi-million-pound drugs operation in East Lancashire have been jailed for a total of more than 70 years following an investigation by our East Exploitation Team. 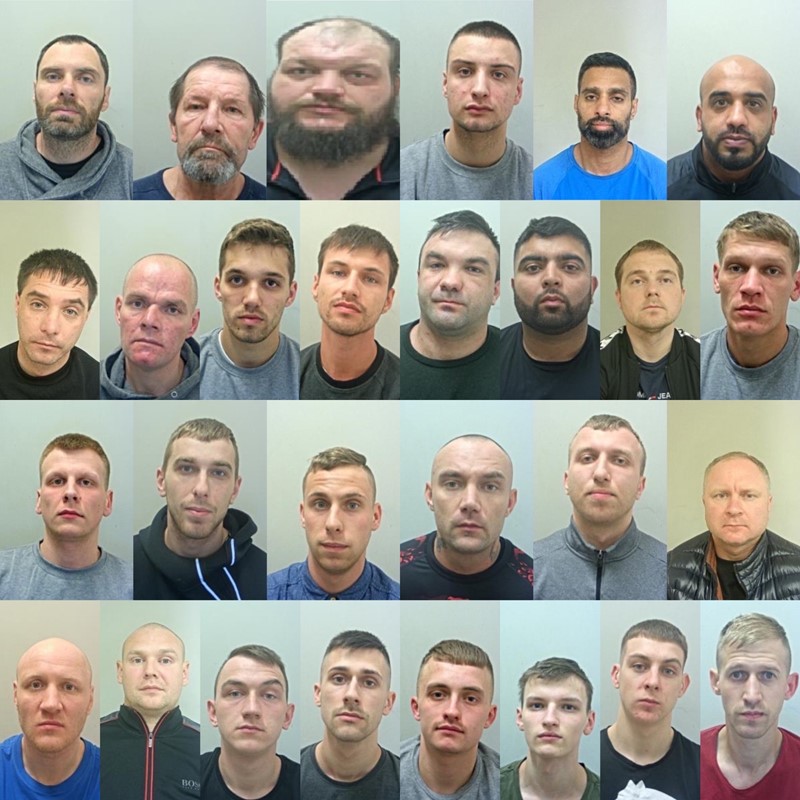 Our latest #opwarrior success saw more than 70 cannabis farms located and dismantled and over 2500 plants and 100 kilos of the drug - with an estimated street value of almost £2million - seized. A total of £725,000 has been recovered from the defendants.

During the course of the 11-month sting, we also recovered hundreds of thousands of pounds in cash, as well as weapons including imitation firearms, CS gas cannisters and a Taser.

The majority of the properties searched had consistent features, including similar doors, windows and exterior cameras – often used by criminals to alert them if a rival drug gang has become aware of their grow and therefore could be preparing to ‘tax’ them by violently stealing their cannabis.

We executed warrants at addresses in Pendle in December 2020, following intelligence gathered when our officers stopped a Volkswagen Golf in the previous month. 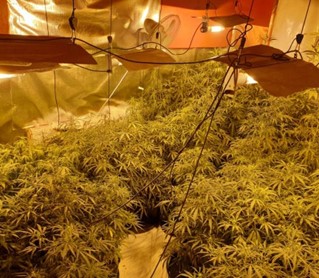 On September 13, 2021, a warrant was executed at a property in Fir Street, Nelson, and sat in the lounge was defendant Claidus Zakarauskas. Also found in the property, which was also linked to defendant Robertas Balzonis, were 106 cannabis plants, mobile phones and paperwork linked to an address in Wickliffe Street, Nelson.

We later executed a warrant at a property in Rhoda Street, Nelson, and found 56 cannabis plants, cash and mobile phones, as well as defendants Rastauskas Paulius and Rimantas Stundze, who were arrested.

Documentation linked to a property in Burlington Street, Nelson was also found. Defendant Simonas Repecka was arrested inside, and cannabis plants, mobile phones and cash were all recovered.

Paperwork found in the property in relation to skip hire led officers to search an address in Rook Street, Nelson, where they found equipment associated with cannabis growing.

When officers were leaving they noticed that another house on the street had exactly the same brand of door they had seen at other cannabis farms, as well as the windows and blinds. When they entered the property they found 60 cannabis plants, as well as paperwork linked to defendant Tomas Ramanauskas and for two properties in Perth Street. When they were searched our officers found nearly 200 cannabis plants.

Following further intelligence, we attended a property in Dalton Street, Nelson. When our officers went to the back door, defendant Aleandro Korbi tried to flee. Korbi was arrested and we seized 62 cannabis plants and 10 kilos drying out in preparation for being sold.

Later the same evening, we attended a property in Cambridge Street, Brierfield, which had the same door as other cannabis farms. Inside we found 86 cannabis plants. 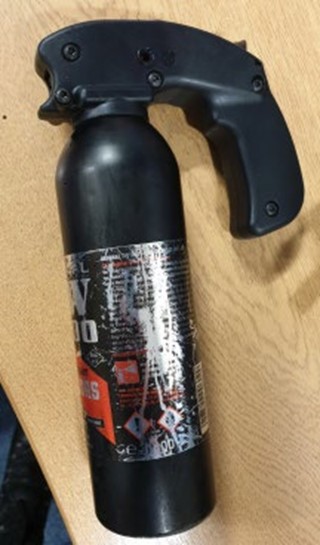 We later searched an address in Carleton Street, Nelson, and found a cannabis farm. The property had the same door and blinds as previously seen. The same doors were also noted at two properties in Rutland Street and when searched, our officers found and seized cannabis.

Ramanauskas was arrested later the same day after evidence was recovered that he had been paying bills for addresses linked to the OCG.

Further enquiries led us to a property in Pine Street, Nelson, controlled by defendant Atif Mushtaq. Inside we found 108 cannabis plants.

On September 22, 2021, defendant Buta was arrested at a property in Scotland Road, Nelson, after enquiries linked him to a previous cannabis seizure. He was detained with cannabis, cash, and he was wearing the same jacket as when he was caught paying bills for one of the cannabis houses.

Evidence led our officers to search a further property in Scotland Road, which in turn led them to an address in Eagle Street, Nelson. Inside that address, they found and arrested defendants Giedrus Snederis and Tadas Zdanavicius as they were in the process of setting up a cannabis farm.

Documents found inside that property led us to an address in Napier Street, Nelson, where 63 cannabis plants were seized.

A further property in Napier Street was searched after officers noticed the same front door and cameras seen at other addresses and 109 cannabis plants were seized.

The tenant in that property had been placed in there by defendant Atif Mushtaq.

An examination of Zdanavicius’s phone led to searches of houses in Walton Lane and Castle Street, with cannabis farms being found in each property. Our officers also searched a rented storage unit in Zdanavicius’s name and found items linked to the growing of cannabis, as well as the packaging for the brand of door that had been found at a number of other cannabis factories linked to the OCG.

Further investigations found that defendant Abdul Wahid had ordered 52 doors from the same company, despite having no obvious form of income.

Enquiries also revealed defendant Shuaib Dar, who was the landlord of properties in Perth Street, Pritchard Street and Berridale, had also ordered three of the same doors. Documents and telephone evidence showed he was in contact with members of the OCG.

On September 27, 2021, we forced entry into a property in Elizabeth Street, Accrington, and found 130 cannabis plants. 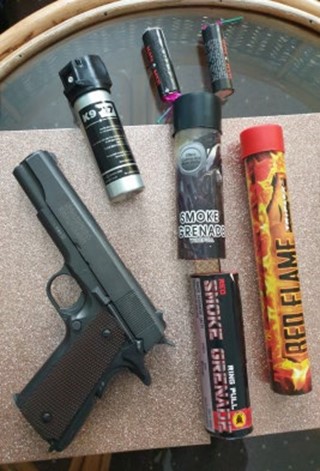 Further mobile phone evidence led us to two properties in Henry Street, Nelson, where cannabis plants and crops were found.

Later that evening we found 140 cannabis plants at an address in Pritchard Street, Burnley.

Zukaitis was arrested at his Brierfield home on September 29, 2021, and phones, cash and a large amount of cannabis were recovered.

Captured the same day paying bills for the address in Henry Street, Nelson, was defendant Lailolas Murlikas. When our officers went to his property in Albion Street, Brierfield, they found mobile phones, £5,000 in cash and equipment used for producing cannabis.

Further evidence obtained in late September 2021, showed defendant Egle Zilinskiene paying bills for the property in Carleton Street. Her mobile phone contained photographs of other members of the OCG.

Due to evidence linking Mushtaq to another member of the OCG, we executed a warrant at his address and found £3,000 cash, mobile phones and documentation for properties in which cannabis had been found.

It transpired Mushtaq had been responsible for arranging the letting of further houses, including properties in Percy Street, Princess Street, Whitehall Street, Manchester Road and West Street – all Nelson. Hundreds of cannabis plants were found.

Search warrants were also granted for properties in Exchange Street, Accrington, and Hawarden Street, Nelson. Located there were defendants Ernestas Dapkus and Remigijus Dovidaisis, as well as bagged up cannabis.

Enquiries at a property in Hawarden Street, Nelson, revealed another cannabis farm. 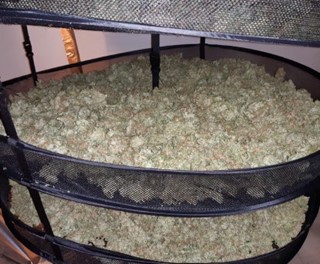 On October 6, 2021, an address was searched in Belgrave Street, Nelson, and a cannabis farm located.

Five days later defendant Justinas Zile was arrested at his home in Athol Street North, Burnley. As well as mobile phone evidence linking him to the OCG, we also found evidence of him paying bills for the property in Perth Street, Nelson.

Further enquiries led us to a property in Rook Street, Nelson, where the defendant Kastytis Zamauskas was found, along with a cannabis farm.

Defendant Rokas Rudokas, who is the owner of a hydroponics company in Great Harwood, was arrested at his home in Nelson, where we also seized £50,000 in cash stuffed into plastic bags, three cannisters of CS gas and burner phones. At his hydroponics unit we found items associated with cannabis growing and £17,000 in a safe.

Whilst we were at the unit, defendant Aidas Radzys arrived. He was arrested and a search of his house saw a number of cannisters of CS gas and an imitation firearm recovered. A cannister of CS gas was found inside his vehicle.

We found another cannabis farm inside a property linked to Radzys in Chapple House Road, Nelson.

DS Stu Peall, of the East Exploitation Team, said: “These defendants were part of a sophisticated OCG which invested significant amounts of time and money into evading the police. It was only through good, committed police work that we managed to unravel this complex network of criminality.

“This OCG sought to exploit some of the most vulnerable members of society for their own greed and I am pleased that its members have been brought to justice. We are committed to tackling these serious and organised crime groups who embed themselves within our communities and often engage in violence. I hope these convictions send a strong message that they will not be tolerated in Lancashire and we will do everything in our powers to put their members before the courts.” 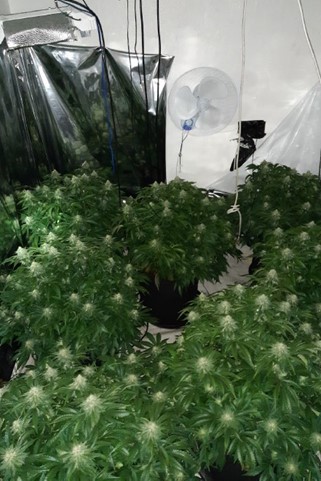 #opwarrior is our response to tackling serious and organised crime in Lancashire and delivering on Police and Crime Commissioner Andrew Snowden's Fighting Crime Plan priority of disrupting and dismantling organised crime.

Andrew Snowden, Police and Crime Commissioner for Lancashire, said: "It's fantastic to see Lancashire Constabulary delivering on my priority to disrupt and dismantle organised crime gangs, protecting our communities and putting gang members behind bars.

"Organised crime gangs bring fear, violence, drugs and exploitation into our communities and through Op Warrior we're increasing activity to get the results we all want to see. The number of arrests, asset seizures and drugs taken off our streets speak for themselves.

"It's important we send a clear message to criminals that we're coming to get you, whilst reassuring the public that we are taking the fight to organised crime gangs at full force.

"I would encourage anyone to report suspicious activity or any information that might help in bringing criminals to justice.”

The defendants were sentenced to the following:

Daugardas Buta 09/02/1997 Scotland Road, Nelson. Conspiracy to produce and supply cannabis. He will be sentenced later this year.