Drugs line closed and seven jailed as part of #OpWarrior

Seven men have been jailed for a combined total of more than 27 years and a drug-dealing line dismantled following our investigation into an organised crime group (OCG). 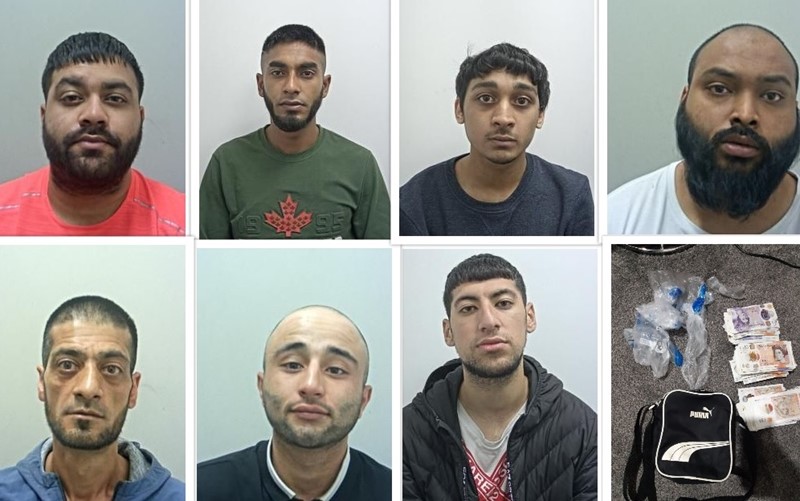 Our East Targeting Team launched an operation in February 2021 following concerns raised about the supply of crack cocaine and heroin in Burnley, particularly in the Daneshouse and Stoneyholme areas.

On February 25, 2021, our officers arrested defendant Shahid Khan after they suspected him of drug-dealing from a flat in Abel Street, Burnley. When the flat was searched they found crack cocaine, heroin, cash and items associated with cooking and bagging Class A drugs. Ahad’s fingerprints were recovered from the scene.

On April 13, 2021, our officers approached a Lexus parked in Coleville Street, Burnley, and defendant Sheikh Juned ran from the vehicle down an alleyway where defendant Mohammed Rawan Ahmed was stood. Ahmed also ran from our officers but Juned was detained with two mobile phones. Snap bags containing heroin and crack cocaine were recovered nearby. One of those phones transpitred to be the Tiger Line.

Around an hour later, Ahmed and Hamza Khan were seen in the alleyway looking around where Juned had been arrested.

Both men were searched and two mobile phones were recovered from Ahmed. Juned’s nickname and number was found in his contacts.

On April 19 a man was stopped in Burnley after engaging in a drug exchange with defendant Aaron Hanson. An examination of his phone revealed he had been in contact with the Tiger Line.

Later the same afternoon Hanson and defendant William Stas arrested in Thompson Park, Burnley, with Hanson found with heroin and Stas with £300 and a mobile phone. A large bag of heroin and crack cocaine was found a short distance away.

When officers were leaving the area, they noticed Hamza Khan arriving in a taxi, in similar circumstances as when Ahmed was arrested.

Enquiries discovered that the Tiger Line number had been phoning Stas’s number before and after his arrest.

The following day Defendant Mohammed Shafi was stopped in Ormerod Road, Burnley, after a member of the public had contacted us to report a man was acting suspiciously. He was searched and found to  be in possession of more than £2,000 cash and crack cocaine. A large amound of heroin and crack cocaine, cash and two mobile phones were found at Shafi’s house.

Enquiries found that in the four days prior to his arrest, the Tiger Line had been in contact with his phone nearly 300 times. It also transpired that Shafi was communicating about the weights and supply of drugs with defendant Abdul Alam and others.

On June 10, 2021, Ahad and defendant Abdul Basit were stopped in a taxi on Oxford Road, Burnley. Ahad was found in possession of just over £2,000 cash and four mobile phones. Ahad was arrested at that time on suspicion of money laundering. Examination of those phones discovered one was the number of the Tiger Line.

One June 14, 2021, Khan Alam and Basit were arrested during simultaneous raids in Burnley.

During searches £14,700 was found in the wardrobe of a house linked to Khan, while Basit was also arrested on suspicion of assaulting an emergency worker due to his conduct while being detained.

Three days later Hanson, Shafi and Ahmed were arrested on suspicion of

On July 21, 2021, a warrant was executed at a flat in Briercliffe Road, Burnley. Saghir was detained in the rear yard and found to be in possession of wraps of heroin and cocaine, £533 in cash and a mobile phone. During his arrest, that phone was being contacted by the Tiger Line. Heroin and crack cocaine and drug paraphernalia were also found in the flat.

Following further enquiries, we returned to the flat on August 26 and found Ahad - wanted since the warrants on June 14 – inside. We also recovered cash, drug paraphernalia and mobile phone linked to the Tiger Line.

Sgt Haydn Sibley, from the East Target Team, said: “This was a sophisticated drug-dealing network whose members targeted and exploited children and vulnerable adults into selling their destructive product.

“These convictions came as a result of dedicated and patient policing and I would like to thank all the officers involved. I hope these convictions and subsequent sentences send out a strong message that East Lancashire is not a safe place for OCGs to operate. We will identify and dismantle your operation no matter how sophisticated you think it may be

“If you are aware of illegal activity in your area I would encourage you to call us on 101, confident that we will take the appropriate action.”

This latest success comes under #opwarrior which is our response to tackling serious and organised crime in Lancashire and delivering on Police and Crime Commissioner Andrew Snowden's Fighting Crime Plan priority of disrupting and dismantling organised crime.

Mohammed Saghir 10/03/1982, of no fixed address, convicted of conspiracy to supply heroin and crack cocaine. Jailed for two years and eight months.

If you are aware of illegal activity in your area report it to us online via https://doitonline.lancashire.police.uk/ or call 101.