Eight members of a Manchester-based organised criminal gang (OCG) have been jailed for more than 80 years following our investigation into a shooting in Burnley.

During the incident, which centred around the attempted taxing of a £220,000 cannabis farm in Salus Street on February 4, 2021, two people suffered gunshot injuries, one man suffered a serious head wound and vehicles were rammed. A car was later set alight in an attempt to destroy evidence.

We were called at shortly before 12.30am to reports of disorder on Wilton Street in the town where a number of individuals were seen attacking a man with weapons.
Shortly afterwards the ambulance service were called to a nearby address to a report of a man with a cut to the head. The man, 31, was taken to hospital and although his injuries were serious they were not life-threatening.
At just after 1.15am we were then called to Burnley General Hospital where a 39-year-old man was being treated for a gunshot wound to the leg. The injury was not life-threatening.
At 4.30am we were then called to reports a silver BMW estate car had been found burnt out on Melville Street.

Our investigation - named Operation Callaway – discovered that defendants Besim Zeka, Elion Gllava, Andon Bita and Ibrahim Beldie travelled from Oldham and South Manchester in three vehicles, including a silver BMW 3 Series, on the late evening of February 3 after receiving information that their cannabis farm was about to be ‘taxed’ by a rival Burnley-based OCG. 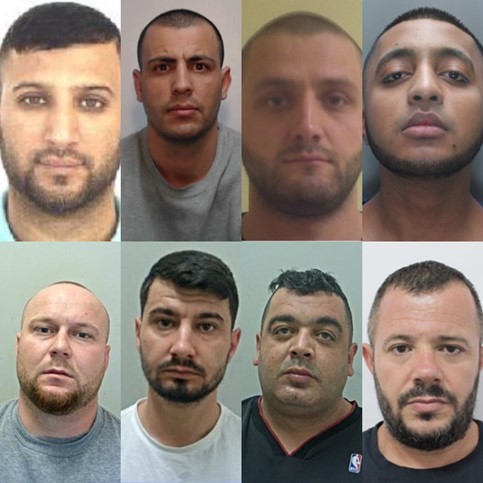 Arriving around 11.50pm the vehicles circled around the Salus Street area for half an hour as they lay in wait for the Burnley-based OCG to begin their attack.

CCTV footage obtained from the area showed people carrying weapons, including, sticks and saws, as well as cars belonging to members of the Manchester OCG ramming other vehicles. Residents also described hearing gunshots and people saying: ‘they have got guns.”

A third member of the Burnley-based OCG suffered a significant headwound after being attacked with a machete-type weapon.

None of those injuries were life-threatening and all three injured men and other members of the Burnley-based OCG have since been arrested as part of Operation Coolant.

Operation Coolant has seen our officers disrupting OCG activity throughout the east of the county by acting on intelligence to target properties and individuals linked to cannabis cultivation and taxings and seize cannabis crops and weapons before rival groups can get to them.

Following the violence in Salus Street, three members of the Manchester-based OCG left the scene in the BMW 3 Series.

However, one of the cars used by the Manchester-based OCG in the disorder – a BMW estate – was so badly damaged it was unable to be driven away.

Zeka, who was stranded in Burnley, contacted defendant Mazhar Shah to collect him in his Mitsubishi Evo and return to south Manchester.

At 4am on February 4, Shah and defendant Gulam Rauf travelled from Cheetham Hill to Burnley where they were captured on CCTV setting the stranded BMW estate alight.

Despite the OCG’s best efforts to destroy evidence, Zeka’s DNA was found inside the burnt-out BMW.

On 13th July 2021 Lancashire Police and Greater Manchester Police worked together in order to execute 18 simultaneous warrants, where the defendants were subsequently arrested.  Zeka was arrested the following day at a hotel in London.

When Gllava was arrested we found handwritten lists and other documents linked to growing cannabis inside his Oldham home. The fingerprints of defendant Andreas Zekaqis were also found on some of these documents. Gllava’s mobile phone was examined and contained images of cannabis grows.

When Bita was arrested we found £14,000 cash. We also found a wooden chair leg which had been shaped into a weapon. When we searched Bita’s mobile phones we found several images of him holding guns and other images of cannabis grows.

When we searched Zekaqis’s home we found 2kg of cannabis hidden in a loft, which he falsely claimed belonged to a previous occupant, and £7,000 in cash. His mobile phone contained images and messages linking him to the cannabis growing operation.

When Ahmed’s house was searched we found £10,000 in cash. A document linking him to Salus Street was found in a car parked outside. Text messages on Ahmed’s mobile phone proved he was linked to largescale cannabis supply and finding properties to house cannabis grows.

We found over £1,000 in cash in Beldie’s home when he was arrested.

Following a trial at Preston Crown Court five of the defendants were found guilty of criminal activity undertaken on behalf of the Manchester-based OCG.

Mazar Shah (03/01/82), of Alms Hill Road, Cheetham Hill, Manchester – found guilty of assisting an offender. He pleaded guilty to perverting the course of justice, which included the arson. Jailed for 3 years.

The below individuals pleaded guilty part way through the trial.

Gulam Rauf (12/6/83), of Hartley Avenue, Prestwich - perverting the course of justice, which included the arson. Jailed for 27 years.

Murtaza Ahmed (22/11/83), of Berry Street, Brierfield - conspiracy to supply a controlled drug of Class B and conspiracy to possess criminal property. Jailed for 4 and a half years.

Andreas Zekaqis (1/5/91), of Acacia Road, Oldham – conspiracy to supply a controlled drug of Class B and conspiracy to possess criminal property. Jailed for 4 and a half years.

Passing sentence, Judge Philip Parry commended the outstanding quality of our investigation, individually commending all the officers involved by name.

“The truly appalling violence that took place in the early hours of February 4, 2021, was completely unacceptable. People have their own views on cannabis and whether or not it should be legalised, which is their prerogative. However, this case highlights the sheer levels of violence associated with cannabis cultivation and the extreme lengths OCGs are prepared to go to in order to protect their commodity. It is more through luck than judgement that nobody was killed or an innocent bystander wasn’t seriously hurt.

“I am pleased with the sentences handed down to these individuals and I hope it sends out a clear message that this kind of violence, although rare, will not be tolerated on the streets of East Lancashire. If you do chose to engage in this behaviour then you should expect to be arrested, prosecuted and put behind bars for a significant period of time.

“I would like to praise all the officers involved in this investigation, both Lancashire Police and Greater Manchester Police, for their painstaking work, professionalism and dedication. From multiple scenes of destruction, they have managed to unravel the inner workings and identify the members of a dangerous OCG and secure some significant sentences. I would also like to thank our colleagues from the Crown Prosecution Service and our Counsel,  James Gelsthorpe and Richard Holland. ”

To report suspicious activity in your area visit https://doitonline.lancashire.police.uk/ or call 101. If a crime is in progress always call 999. 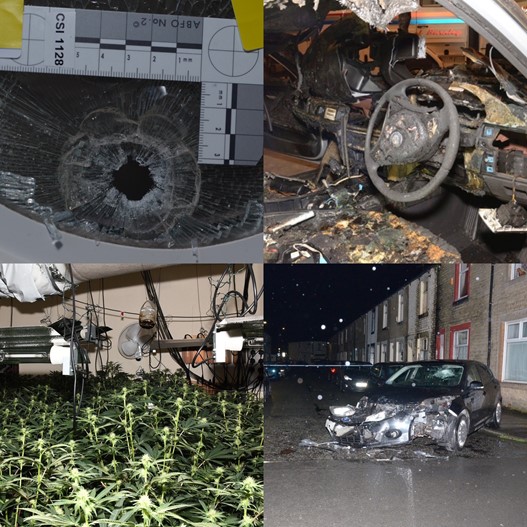