A man has today (Wednesday, May 4th) been given a sentence totalling 18 years and seven months for raping a young woman and sexually assaulting another on the same night in Preston. 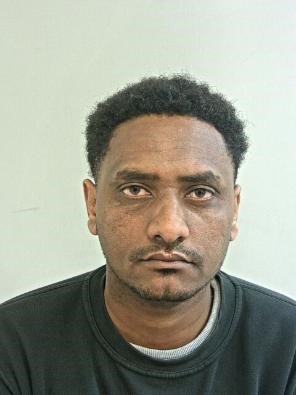 Amanuel Tsegay, 37, was sentenced at Sessions House in Preston, having previously pleaded guilty to rape and sexual assault.

The rape victim, who was 18 at the time of the offence, was attacked by Tsegay at around 4:20am on September 22nd 2019, after becoming separated from her friends following a night out in Preston.

She was walking along Lancaster Road, and when she reached the junction with Harris Street was approached by Tsegay. After a brief interaction, they walked together onto Lord Street, where he raped her on a grassed area.

An investigation was launched and detectives found Tsegay had travelled into Preston by train from Manchester several hours before the attack. He was then seen walking around Preston city centre.

He was arrested on October 8th 2019 and subsequently charged with rape.

Detectives viewed several hours of CCTV and, following a media appeal, were also able to trace another victim, aged 19 at the time of the offence, who Tsegay had grabbed and forced himself upon on the same night, when she offered him some food.

Tsegay, 37, of Lords Avenue, Salford, was given a custodial sentence of 12 years and seven months. He was given a six-year extended licence period after a judge deemed him to be a dangerous offender. That will mean he will continue to be monitored by the appropriate authorities even after he is released from prison.

Tsegay was also ordered to sign the Sex Offenders Register for life.

In a victim impact statement read out in court, the rape victim said: “Before that night I was happy, I liked to meet new people and make new friends. I didn’t have any worries and now that has all changed.”

She explained that the incident has left her unable to sleep properly and having nightmares when she does. She has been forced to give up her job due to anxiety.

She added: “Before the attack I was quite independent. What he did has changed all that. I don’t feel happy and carefree like I was. This is always there.”

The victim of the sexual assault told the court her sleep has been affected, she has lost her sense of independence and has felt the need to change how she dresses.

In her victim impact statement she added: “I feel apprehensive about people coming near me and feel that I have used up all of my luck and am apprehensive and anxious when I go out of the house.”

Det Insp Fiona Jackson, from Lancashire Police, said: “I am satisfied with today’s result and would like to commend both victims for their bravery. It has taken over two years to reach a conclusion, mainly because of the pandemic, but they have continued to provide support for the process throughout.

“Amanuel Tsegay is a sexual predator and it is clear from CCTV footage that he was prowling around the centre of Preston looking for vulnerable women. He raped one young woman, forced another woman into a kiss and made lewd comments about performing a sex act towards two others.

“I would like to thank my colleagues who worked on this investigation, painstakingly combing through hours of CCTV to find Tsegay. This assisted with media appeals, which led to him being caught. I would also like to thank the public who supported and responded to these appeals as they provided vital information.”

Anybody who is the victim of a sexual offence should report it to us safe in the knowledge that they will be treated sensitively and professionally at all times. You can call 101 or ring 999 in an emergency.