Do you recognise these people? 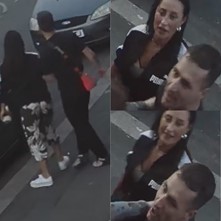 We want to speak to them after a man was stabbed in Blackpool.

Police were called at around 4:25am today (Friday, June 10) to a report of a man who had been found unconscious on Dickson Road in the resort.

Emergency services attended the scene and found a man, believed to be in his 20s with a suspected stab wound to his chest.

He was taken to Blackpool Victoria Hospital for treatment and is now in a stable condition.

No arrests have been made at this stage but enquiries ongoing.

As part of those enquiries we now need to speak to the man and woman in the CCTV stills who we believe may have key information.

Detective Chief Insp Lee Wilson, of Blackpool CID, said: “This incident has left a young man with some very serious injuries. I have a team of detectives who are working on this investigation and we are following a number of lines of enquiry in order to try and identify the offender.

“I would appeal for anyone who saw anything suspicious in the area around Dickson Road, Springfield Road or General Street this morning or who has any information to come forward and speak to us.

"I particularly want to hear from anybody who recognises the man and woman in the CCTV stills. I want to appeal directly to them to attend their nearest police station if they see this appeal.

"I am also keen to hear from anyone who may have CCTV or dashcam or any taxi drivers who may have been working in the area overnight.”