A Blackburn man who attempted to groom girls he thought were 13 and 14-years-old and asked them to send explicit images of themselves to him has been jailed. 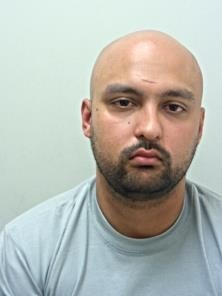 Despite being told of the girls ages, 28-year-old Suleman Mahmood continued to send them sexually explicit messages.

It transpired Mahmood was communicating with decoys from the Online Child Abuse Activist Group (OCAAG). In order to prove Mahmood was the person sending the messages, members of the OCAAG attended his home in Dukes Brow on the evening of September 20, 2019.

Officers attended Dukes Brow and arrested Mahmood, who signed a statement at the scene in which he stated: “I will be honest. I have made a big mistake. I had no intention to meet them. I just wanted to make friends. I knew they were underage.”

During police interview, Mahmood answered no comment to all questions put to him.

With the cooperation of the OCAAG and extensive investigation of digital evidence, detectives managed to establish that Mahmood believed he was talking to underage girls when he sent the highly sexualised messages and had incited them to engage in sexual activity.

Mahmood, of Dukes Brow, Blackburn, was due to stand trial in May of this year. However, in April he pleaded guilty to the offences listed above.

Last week at Preston Crown Court, Judge Graham Knowles QC jailed Mahmood for five years and eight months. He also ordered him to sign the Sex Offenders Register for life and made him subject to a Sexual Harm Prevention Order, limiting his access to the internet and interaction with children.

DC Claire Scott, of East CID, said: “Mahmood is a sexual predator who attempted to groom and engage in sexual activity with underage girls. When he committed these offences, he genuinely believed – having been told by the decoys – that he was talking to real children. Despite knowing that he continued with his abhorrent behaviour.

“I am pleased with the sentence handed down to Mahmood and it reflects the danger that he presents to teenage girls. The associated court orders mean that Mahmood will be monitored by the authorities after he has been released from prison.

“We will continue to pursue and bring to justice, with the public’s help, those who seek to abuse youngsters for their own sexual gratification.

“I would like to thank OCAAG for their cooperation throughout this investigation. If anybody has concerns about an individual, I would always encourage them to contact the police in the first instance. We will thoroughly investigate those concerns and gather the evidence to put anybody who seeks to abuse children before the courts.”

Report any concerns online at https://doitonline.lancashire.police.uk/ or call 101.