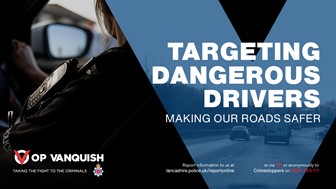 The operation will see a week of surge activity take place, aimed at tackling those who use the county’s roads for criminality – from using a mobile phone at the wheel to transporting stolen vehicles.

Over the next week officers, including specialist teams, will be stopping vehicles and targeting people where intelligence suggests they may be involved in this type of criminality.

It follows a week of activity where Lancashire Police supported a National Highways-led operation to tackle commercial vehicle crime along the M6.

Supt Mark Morley, of Lancashire Police, said: “The majority of people are law-abiding and follow the rules, and to those people we say ‘thankyou’. However, there’s a minority of people who believe the law doesn’t apply to them and Op Vanquish is about them.

“Over the coming week we will be proactively targeting those who use the county’s road networks to commit crime, from dangerous driving to bringing drugs into our communities. We will be out and about stopping people and targeting those we are led to by community intelligence.

“We hope this sends a message that we will not tolerate those who commit criminal activity and that we are committed to making our roads safer for those who live and work in Lancashire.”

This week of action is part of ongoing Op Vanquish, which was set up to #bringthefighttocriminals. Previous weeks of action have targeted those involved in drug-dealing and those wanted for acquisitive crime such as burglary and theft.

Andrew Snowden, Police and Crime Commissioner for Lancashire said: "This dedicated week of action is exactly what the public want to see on our roads, with officers out targeting dangerous drivers who are putting themselves and others at risk.

"Surge activity through Operation Vanquish is an important part of the Chief Constable's response to my Police and Crime Plan and demonstrates how we are proactively taking the fight to criminals and delivering our priorities.

"Officers will be out across the road network addressing the issues that matter most to people, including those driving at very high speeds, drink and drug driving and mobile phone use.

"As I continue to lead the fight against crime, I will continue to back the Chief Constable with the resources he needs to get tough on crime and keep the people of Lancashire safe."

If you have any information about anyone you suspect is committing crime, please contact us. You can contact us on 101, report online or speak to the independent charity Crimestoppers, free and in confidence, on 0800 555 111.