Four men jailed after we found an £830,000 haul of Class A drugs and three firearms in Darwen

Four men have been jailed for a combined total of 27 years and four months after we found an £830,000 haul of Class A drugs and three firearms in an industrial unit in Darwen. 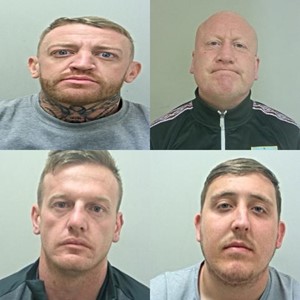 In October 2019, our officers executed at a search warrant at the property in Kay Street where they found a locked safe box containing £480,000 of cocaine with an 80 per cent purity and a freezer containing £353,000 of amphetamine.

They also found two handguns with rounds of ammunition and a silencer, and a pump action shotgun with shotgun shells. Two bottles of hydrochloric acid, the working parts of a drugs press and drugs packaging were also found during the course of our search.

Nobody was inside the property at the time.

Our extensive CCTV enquiries showed defendants Ben Snell and Damien Derbyshire entering and leaving the unit in the months prior to the warrant being executed.

Mercedes Citan and Citroen Berlingo vans, which had hidden compartments in the back, were both seized during the course of our investigation. They were used by Derbyshire and Snell to drive to and from the unit.

Derbyshire and Snell were also linked to the drug supply conspiracy by paperwork and payments connected to the unit, as well as mobile phone evidence.

Defendant Ryan O’Donnell was arrested at and address in Corinthian Avenue, Manchester, after his DNA was recovered from the trigger/guard of the black and silver handgun. We found cannabis, cocaine and dealer debt lists at that address.

Defendant Jay Thomas Carney was arrested on the same day at an address in Fairy Lane, Manchester, after his DNA was recovered from the trigger/guard of the shotgun. 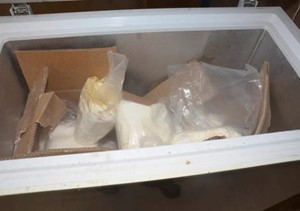 Derbyshire, 43, of St Ledger Court, Accrington, pleaded guilty to conspiracy to supply Class A and Class B drugs and was jailed for six years.

Snell, 34, of no fixed address, pleaded guilty to conspiracy to supply a Class B drug, possessing prohibited firearms, possessing ammunition without a certificate and possessing shotgun without certificate. He was jailed for nine years.

Carney, 24, of Indus Place, Salford, pleaded guilty to possession of a shotgun without a certificate and was jailed for two years and six months.

DC Paul Hayes said: “This was a complex investigation which has resulted in members of an organised criminal group being given significant custodial sentences. They thought they could cleverly conceal their criminal activity but through good detective work and targeted policing we have managed to dismantle their web of illegal activity. 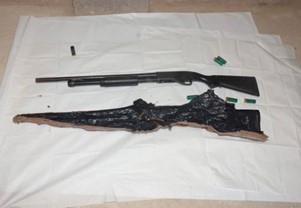 “Lancashire Police will not tolerate the illegal activities of organised criminal gangs on our streets. I hope the outcome of this case sends a strong message that East Lancashire is not a safe place to operate for those intending to deal drugs and arm themselves with deadly weapons. If you chose to do so, we will look for you, we will find you, and we will put you before the courts.”

DS Steve Munro, of East CID, said: “I would like to praise all the officers who have worked on this case, as well as our colleagues from the Crown Prosecution Service, for their professionalism and dedication in this case. Without that work this significant drugs haul would have been flooded onto the streets of Lancashire and three lethal weapons could have been used to inflict serious or fatal harm.

“I would encourage anybody who has information about illegal activity happening in their area to contact police via 101, confident that we will take the appropriate action.”