Men given sentences totalling 34 years after cash in transit robbery

Two men have been given combined sentences totalling 34 years after we prosecuted them for their roles in a cash in transit robbery.

The robbers, who transpired to be Gordon Hopkins (pictured on the left) and Anthony Hughes, escaped in a black Volkswagen Golf, having stolen three cash cassettes containing £80,000.

Less than an hour later the Golf was spotted on the M62 and our colleagues from West Yorkshire Police stopped the vehicle in Sowerby Bridge. 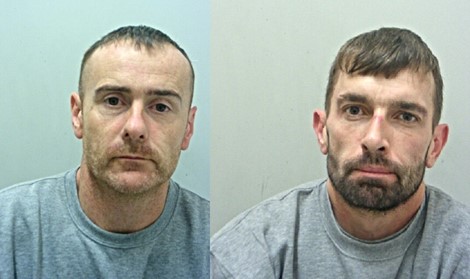 Hughes ran from the vehicle and across the live lanes of the M62, dropping his snood as he tried to escape. We traced the snood back to 38-year-old Hughes via DNA analysis.

Hopkins, 44, fled into a nearby garden and was seen by a witness stuffing items into a wheelie bin while wearing latex gloves. We linked a balaclava found in the wheelie bin back to Hopkins.

Recovered from the Golf was £80,000 cash and a cloned number plate used in the offence.

Hughes, of Coronation Parade, Leeds, and Hopkins of Spen Walk, Leeds. Both pleaded guilty to robbery and possession of an offensive weapon.

DS Dave Bowler, of East CID, said: “Hopkins and Hughes are dangerous individuals who travelled from West Yorkshire armed with weapons and intent on committing a pre-planned robbery. Their reckless and selfish actions could have easily resulted in somebody being seriously injured or even killed.

“It was thanks to the dedication and hard work of my colleagues, both in Lancashire and West Yorkshire, that these two individuals are now starting significant custodial sentences. Even when they are released, the fact that they are on licence means they will continue to be monitored by the authorities.

“I hope these sentences send out a clear message that we will not tolerate the behaviour of anybody who arms themselves with a weapon and commits a crime in Lancashire. We will use all the resources at our disposal to identify them, charge them and put them before the courts.”