Operation Hunter: Do you know the latest most wanted faces for Lancashire?

Do you recognise any of these faces who make up this week’s most wanted?

They are all wanted as part of Operation Hunter which targets those wanted individuals who try to evade capture.

Launched in July, this operation sees taskforce officers from across the Force as well as specialist units including Tactical Operations and the ANPR intercept teams target individuals wanted for a range of offences including domestic abuse, sexual offences and general criminality.

* Joel Ludlum, 26, of Kime Street, Burnley has been arrested today (October 15) and recalled to prison to serve the remainder of his sentence for burglary.

* Adam Hulme, 30, from Longridge handed himself in on Monday (October 11) following our appeals to locate him after he failed to appear at Preston Magistrates Court in July.

* Reece Murgatroyd, 22, of no fixed address, who was wanted on prison recall and on suspicion of possessing an offensive weapon, was arrested at an address in Padiham yesterday (October 10).

Murgatroyd was arrested on suspicion of dangerous driving, Section 18 Assault, affray and possession of an offensive weapon. He remains in custody at this time and will be recalled to prison in due course.

*Following our appeals for information a 35-year-old man from Morecambe was arrested in connection with an investigation into harassment and stalking. He has since been released with no further action. 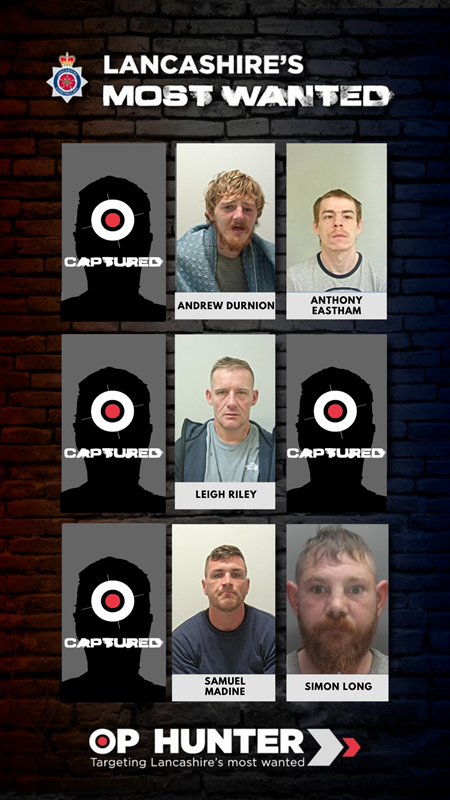 Wanted in connection with assault in Preston.

Long, 41, has been wanted following the incident on September 30 in the Bamber Bridge area.

Long, from Southport, is described as 5ft 6in of medium build with light brown hair and a ginger coloured beard.

Anyone with information is asked to contact 101 or email [email protected] or you can contact Crimestoppers on 0800 555 111.

Wanted on recall to prison after breaching the terms of his licence.

Eastham, 29, of Thurnham Road, Ashton-On-Ribble, has been wanted since last week and the public are urged not to approach him, but instead contact us with his location and a description of clothing.

He is described as 5ft 5in tall of thin build, with cropped dark brown hair and usually clean shaven.

Eastham has links to Bamber Bridge and Preston city centre.

Wanted in connection with an assault and criminal damage.

Riley, who also uses the surname Orriss, has been wanted since September 26th following the incident which happened at an address in Preston.

The 46-year-old, formerly of Sefton Road, Morecambe, is described as 5ft 8in tall with blue eyes and short brown hair.

Riley has links to Morecambe and Lancaster.

Wanted on recall to prison to serve the remainder of his sentence for robbery.

Durnion, 32, of Westmorland Avenue, Blackpool has been wanted since September 2nd after breaching the terms of his licence.

The public are advised that he is not to be approached as is known to be violent, but instead contact police with his location and a description of his clothing.

Durnion is described as 6ft 2in tall of medium build with light brown hair and blue eyes.

Wanted in connection with a serious assault in Blackpool.

Madine, of Dickson Road, has been wanted since July following the assault.

The 33-year-old is described as 5ft 11in tall of stocky build with short dark brown hair and blue eyes.

As well as Blackpool Madine has links to Bispham and Fleetwood.