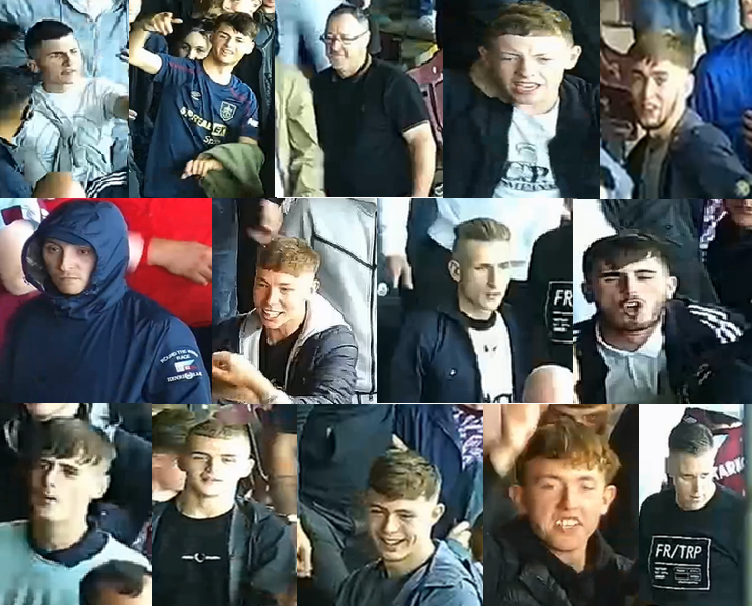 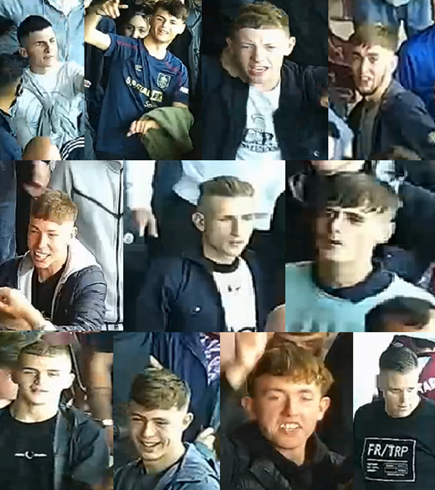 UPDATE: We have now identified three of the men we wanted to speak to. Can you help us identify the rest?

We want to speak to them following an incident of disorder which occurred at the end of a Burnley v Arsenal match in September.

The game was held at Turf Moor on Saturday, September 18th and the disorder occurred in the Cricket Field Stand. Fans from the two teams were segregated, but items including bottles and wooden seats were thrown across the line.

No injuries were reported by fans, though a steward reported being hit by something.

We are now asking for the public’s help to identify the men in the images – all believed to be Burnley fans – as part of our enquiries.

Police in London have also been working to identify several Arsenal fans.

PC Dan Fish, of Burnley Police, said: “Football matches should be safe, family-friendly events, and the kind of disorder seen at the end of the Burnley v Arsenal match is unacceptable. It was simply due to luck rather than judgment that nobody was seriously injured.

“An investigation to identify those responsible has been ongoing since September and we would now like to speak these 11 men as part of our enquiries. If you think you know who any of them are, please let us know.”

Anybody with information should email [email protected] or call us on 101, quoting log 715 of September 18th 2021. Alternatively you can contact us online at doitonline.lancashire.police.uk

A spokesman for Burnley FC said: “Following the disorder at the Burnley v Arsenal match at Turf Moor on Saturday 18th September 2021, both clubs have worked with Lancashire and Metropolitan Police to identify the individuals responsible.

“Several individuals have already been identified and are currently banned.

“Burnley and Arsenal Football Clubs have stated that those responsible will receive lengthy bans in addition to any conviction from the courts. Both clubs strongly condemn the behaviour of their fans.

“We ask that the public contact the police with any details of those contained within the pictures circulated.”