A sex offender who was found sleeping rough in a Blackburn park following three days on the run has been jailed after being convicted of possessing hundreds of horrific child abuse images. 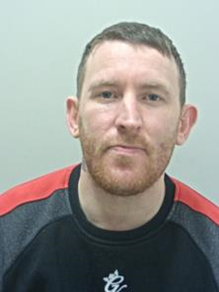 On May 4, last year, Sheldon Bateson (pictured), who was previously convicted of child indecent image offences and subject of a notification requirement, was arrested in Witton Park.

This followed a three day search after Bateson broke the terms of a court order by failing to register a change in living circumstances which meant he was of no fixed address.

When he was arrested 34-year-old Bateson handed over a primitive mobile phone but following a search of the surrounding area by a police dog a smart phone was found.

Bateson denied any knowledge of the mobile phone but it was linked to the defendant via ‘selfies’ found on the device.

Officers also found approximately 200 indecent images of children on the phone, which had only been in Bateson’s possession for four days.

There was also evidence that Bateson had been receiving and sharing indecent images and videos, which depicted the abuse of very young children, with other sex offenders on an instant messaging mobile application.

Bateson, of no fixed address, was convicted of making and distributing indecent images of children, failing to comply with the terms of his notification requirement and breaching a sexual harm prevention order.

He was sentenced to 49 months in custody when he appeared at Preston Crown Court yesterday (January 27) and made subject of an indefinite sexual harm prevention order.

PC Treena Peel, of the East Sex Offender Management Team, said: “I welcome the sentence handed down to Bateson, who is clearly a dangerous individual and has a very worrying attraction to children.

“The images found on his phone were of a horrific nature and it is thanks to great team work that Bateson was arrested and key evidence in the case was quickly recovered.”