A man who deliberately set fire to a Burnley nightclub has been jailed for 47 months. 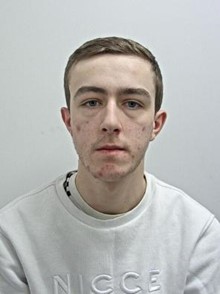 On September 26, last year, officers were called to Mac's Bar on Hammerton Street to reports of smoke coming from the premises.

Once firefighters had dealt with the blaze officers were able to establish the fire was of a suspicious origin and two melted petrol cans were found within in the DJ booth.

CCTV footage showed a man, who is now known to be Jordan Schofield, using an angle grinder to detach the door lock and enter the club. Once inside Schofield set fires in the DJ booth and bar area of the nightclub, before leaving.

In the early hours of November 20, officers were contacted by a member of the public who had seen a man attempting to break into the Illuminati Bar on Hammerton Street using an angle grinder.

Officers attended the scene and found Schofield hiding in the alcove of a building in Hammerton Street.

When he was taken to custody officers seized a red lighter, along with a black cable tie. Officers also found a green bag containing four plastic petrol canisters, each containing what is believed to be petrol, close to where Schofield was arrested, as well as a black hoodie, gloves, a green North Face baseball cap, a torch and an angle grinder.

CCTV footgae showed Schofield approaching Mac’s, while new damage was detected on the lock which had been replaced on September 26.

Schofield, 22, of Compston Avenue, Rossendale, was charged with arson and remanded into custody.

Last week he was convicted of arson and attempted arson when he appeared at Preston Crown Court.

PC James Jankovski, of Burnley CID, said: “Schofield’s actions were reckless and could have easily resulted in serious or fatal injuries being caused to himself of others, as well as himself. Not content with his first attempt at burning the nightclub to the ground, Schofield returned to the scene of the crime and it was thanks to the vigilance of the public and speedy response of officers that he didn’t succeed in his aim.

“Lancashire Constabulary will not tolerate the kind of thoughtless behaviour demonstrated by Schofield and I hope he uses his time in custody to fully reflect on what he did.”