A man who walked into a house in Accrington and attacked one of the occupants with a vodka bottle has been sent to prison for 32 months. 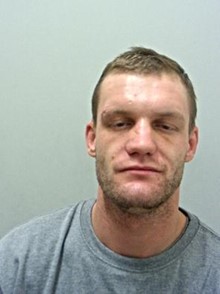 Police we called to the Nuttall Street area of the town on August 22, last year, to the reports a man had suffered a significant head injury.

When emergency services arrived they found a man in his 20s had suffered a large cut to his head and lost a significant amount of blood. At one stage his condition was feared to be life-threatening but thankfully that proved not to be the case.

Threlfall appeared at Preston Crown Court today (February 17) where he was due to stand trial. He pleaded guilty to a Section 20 assault on the full facts of the prosecution’s case and was given an immediate custodial sentence.

DC Vicky Heys, of East CID, said: “This was a cowardly attack which could have easily resulted in the loss of a man’s life. It is more through luck than judgement that Threlfall wasn’t facing an even more serious charge.

“I am glad that Threlfall is now in a prison cell and the people of East Lancashire can have some respite from someone who has shown a propensity for using violence.

“This should send out a clear message to others that if you attack people with weapons then you should expect to go to prison.”

If you have been the victim of a crime call police on 101 or report it online at https://doitonline.lancashire.police.uk. Alternatively call independent charity Crimestoppers on 0800 555111.