Everyone in our county should be allowed to live their lives free from harassment and the fear of hate crime.

That’s the commitment from Lancashire Constabulary after a man was convicted of the appalling online abuse of a Chinese Doctor.

Philip Kenway, 32, posted horrifying messages directed at the medic after she posted images on a local Facebook group of children who had assaulted her as she left work in Lancaster.

The investigation into that assault – which happened in October last year - is ongoing.

He was given a 16-week prison sentence, suspended for 12 months, and ordered to undergo a course of rehabilitation.

Detective Constable Mark Nelson, of Lancaster CID, said: “The abuse directed at the victim in this case was absolutely disgusting and understandably left her extremely distressed and frightened for her safety.

“As if being physically attacked and then racially abused wasn’t enough this was directed towards an NHS employee in the middle of a pandemic.

“Everyone in our county should be allowed to live their lives free from harassment and the fear of hate crime and Lancashire Constabulary will continue to take a zero tolerance approach to offences like this.

“Hate crime causes great distress to its victims and we are committed to investigating all crimes and incidents motivated by hate, supporting victims and bringing offenders to justice.”

Lancashire Police and Crime Commissioner Clive Grunshaw added: "This result sends the clear message that we won't stand for hate here in Lancashire. Attacking someone physically or verbally simply because of who they are is unacceptable and it is something we take very seriously.

"Hate crime can have a long term impact on those affected and it can be difficult to move forward after being targeted. Specialist support is available through Lancashire Victim Services and I would urge anyone affected to contact the service for help and support."

If you have witnessed or been a victim of hate crime you make a report by:

If you’re a victim of a hate incident or crime, specialist Hate Crime Advocates from Lancashire Victim Services will be able to support you and provide expert advice. 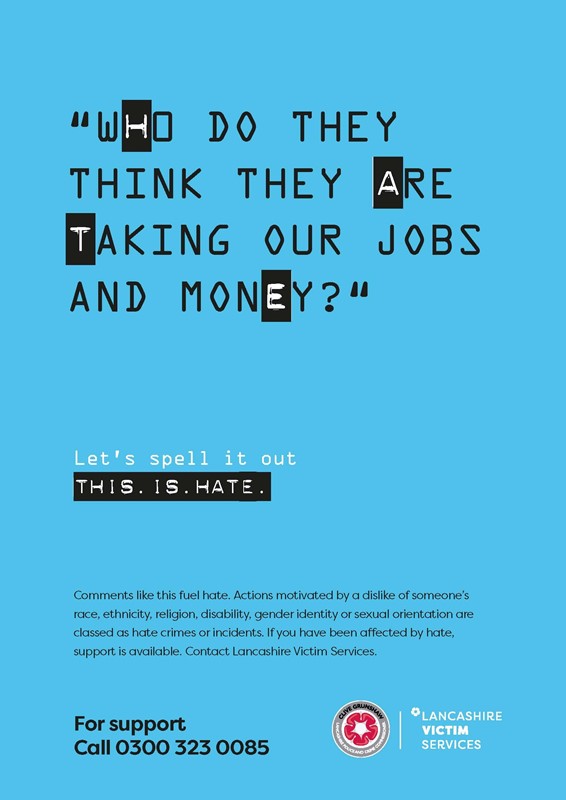