A man has been sentenced to six and a half years custody after two people were deliberately driven at outside a nightclub in Rawtenstall.

Police were called to Bacup Road in the town at 11.30pm on Christmas Eve 2019 following reports that a blue Volkswagen Golf had mounted the pavement outside the Revival nightclub and was driven at a man and a woman. 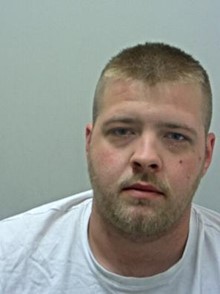 Prior to the incident outside nightclub, there had been an altercation between Clarke and the two victims – a man and a woman who are both in their 20s – in a nearby pub. During that incident the male victim was subjected to racial abuse and both he and the female victim were threatened with violence.

The victims then headed to the nightclub and Clarke got into the Golf.

It was while the victims were queuing to get inside the nightclub that the car was deliberately driven at them.

Dashcam footage from a nearby vehicle showed the Golf slows down once the victims are in sight and it then accelerates, mounting the kerb and hits both the man and woman side on and knocks them to the floor. The Golf is then driven at the woman for a second time, before later being reversed at both victims, knocking the woman to the floor.

The Golf was then driven off along Bacup Road, almost hitting a member of the public and narrowly avoiding a head-on collision with another car.

Clarke, of Bacup Road, Rossendale, then drove the Golf up and down Bacup Road a number of times and only stopped when a member of the public threw a metal gate at the car’s windscreen.

DC Melisa Chadwick, of East CID, said: “I welcome the sentence handed down to Clarke and I hope it sends out a clear message that Lancashire Constabulary and the courts will not tolerate this reckless and despicable behaviour.

“Clarke made the conscious decision to turn his car into a weapon and it is extremely fortunate that it did not result in the death of his completely innocent victims or a member of the public.

“This incident caused a great deal of concern in the community at the time and I am glad this case has now been brought to a conclusion and Clarke will have a considerable time in custody to think about the consequences of his actions and how much worse it could have been.”