Jailed: Sex offender who abused girl in Ormskirk changed his name in attempt to evade justice

A convicted sex offender is starting a second spell in prison after admitting to sexually abusing a child. 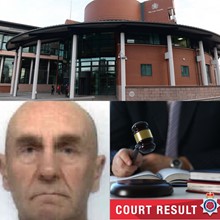 In April 2019 an investigation into the activities of Donald Maxwell Boyle was launched after a victim came forward to say she had been abused by the defendant in Ormskirk in the 1980s.

At that time Boyle went by the name of Donald Maxwell Wells but changed his name by deed pole after being jailed for abusing a child in the late 1980s, later moving to Wales.

While abusing the girl in Ormskirk, Boyle would instruct her in detail of exactly what he wanted her to do to him. He also made threats towards her to ensure she did not tell her parents what had gone on.

When Boyle, 71, of Llewelyn Street, Aberffraw, Ty Croes, Gwynedd, Wales, was interviewed by police, he denied any wrongdoing.

When he appeared before a Judge at Preston Crown Court earlier this year Boyle pleaded guilty to charges of indecent assault and indecency with a child.

Last week he was sentenced to five years in custody.

He was also given an indefinite Sexual Harm Prevention Order and told to sign the Sex Offenders Register for life.

DC Kelly Rosenthal, of Ormskirk CID, said: “Boyle is a manipulative and controlling individual who abused his young victim for his own sordid sexual interests. He went to great lengths to try and evade justice, first threatening his victim and then changing his name after being released from prison.

“Thanks to the bravery of the victim in coming forward and the determination and dedication of all the officers involved in this case, Boyle’s past has well and truly caught up with him.

“I hope this case and its outcome will encourage other victims of sexual abuse – no matter how historic – to come forward. They can do so knowing they will be listened to, believed and that Lancashire Police will do everything in our power to keep them safe and bring the perpetrator to justice.”

If you or somebody you know has been the victim of a sexual offence report it to police via 101 or https://doitonline.lancashire.police.uk/