A man has today (Monday, April 19) been sentenced to life in prison after stabbing and murdering another man in Fleetwood.

Rhys Austin (pictured, right), 23, of Poulton Road, Fleetwood, was jailed for a minimum of 23 years at Preston Crown Court after being found guilty of the murder of Danny Wise. 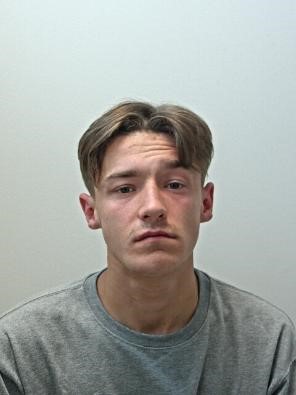 Police had been called around 8.05am on June 24, 2020, after reports of an assault in Mowbray Place, close to a building site on Laidleys Walk.

Emergency services attended with a 32-year-old man found with a suspected stab wound. The man, Danny Wise (pictured, below right), was taken to Blackpool Victoria Hospital with neck injuries but sadly later died.

Austin was arrested at the scene after he was detained by members of the public.

Detectives launched a murder inquiry and following investigation found Austin had been in dispute with Mr Wise on social media on the morning of the attack.

CCTV enquiries showed Austin cycling to the building site around 7am and asking for Danny Wise.

Mr Wise was not there and Austin left, returning to the site around 8am. Mr Wise arrived for work a short time later where there was a verbal confrontation.

Austin moved into the road, throwing a hammer to the floor and turning out his pockets, suggesting he no longer had a weapon.

He walked into Mowbray Place, followed by Mr Wise, with work colleagues nearby. These witnesses described Austin pulling a knife from his trousers and instantly stabbing the victim in the neck.

Austin was detained at the scene with Mr Wise walking a short distance back to the building site before collapsing and losing consciousness. He was taken to hospital but sadly later died.

A post mortem established cause of death as a single stab wound to neck.

Rhys Austin was later charged with murder. He pleaded not guilty.

Following a trial he was convicted and sentenced to life in prison with a minimum term of 23 years.

Det Ch Insp Gareth Willis, of Lancashire Police, said: “This was a crime driven by jealousy.

“Rhys Austin had grown suspicious after wrongly believing Danny Wise had an interest in his girlfriend.

“The pair exchanged messages on social media culminating in Austin visiting Danny’s workplace looking for a confrontation. He was armed with a hammer and also a knife which he had hidden within his clothing.

“From evidence and eyewitness accounts Austin tried to give the impression he had no weapons as he discarded the hammer to the floor. This was a deliberate attempt to lure Mr Wise into the alleyway for a fight. Once there he quickly produced a knife from his clothing and launched a savage and fatal attack, stabbing him once in the neck.

“It was a premeditated, wicked, cowardly attack which Danny Wise was not expecting and very sadly he died a short time later.

“I want to take the opportunity to pay tribute to Danny’s work colleagues who bravely rushed to his aid as they realised he had been stabbed. They disarmed Austin, restraining him on the floor until the police attended and arrested him. Their actions undoubtably saved Danny from receiving further injuries but sadly the stab wound proved fatal.

“Rhys Austin actions were fuelled by jealous rage and it is clear to me he is a dangerous and violent individual. He and Danny had clearly fallen out over social media and exchanged abusive messages but it was him and him alone who decided to arm himself, attend Danny’s place of work and carry out this cowardly attack.

“We welcome the decision and sentence handed down by the court.”