Four men have been convicted following a robbery in Aughton which left a man with serious gunshot wounds to his knee and ankle. 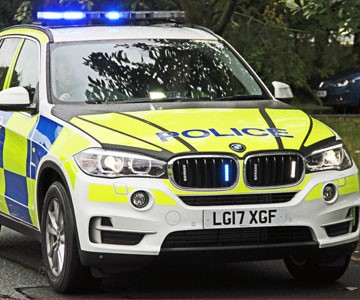 Officers, including armed police, attended the address and found the man, 65, with serious gunshot wounds to his ankle and knee.

Five shotguns, jewellery, watches, and cash were stolen from inside the property before the offenders made off from the scene.

Following enquiries detectives established the victim had been asleep in a static caravan in the rear garden of the property when he was woken by a noise outside.

He got up and walked to the patio doors where he saw a number of men wearing masks, hoodies and carrying shotguns.

One of the men saw the victim and discharged a gun through the patio door, with pellets hitting a television inside the caravan.

The man went outside where the group started to poke him with the weapons, demanding money. The man offered to give them some cash from inside the property, but as he reached the property, he was shot in the knee.

The victim’s partner, who was inside the address, went to help but the group told her to get out of the way. Once inside the men took cash and watches, then enquired whether the victim had any guns. When he hesitated to answer, he was shot at close range in the ankle by one of the defendants who demanded, “answer quicker.” One of the defendants also slammed the rifle of his gun into the victim’s mouth and groin area.

The men made more demands for the keys to the owner’s gun cabinet, hitting the victim in the face again. Three of the men went upstairs and stole shotguns belonging to the victim, while a fourth man stole the victim’s gold bracelet, having removed it using a letter opener.

As the men came downstairs, the 65-year-old man faked a heart attack, forcing the attackers to leave. As the men left the property, they warned that if either of the couple called the police within an hour they would return and kill him.

The victim was taken to hospital and has suffered devastating and life changing injuries to his ankle which he has never recovered from. He is still suffering serious complications as a result of these significant injuries.

During the robbery, four shotguns, a poacher’s gun, a quantity of cash, a Raymond Veil watch worth about £500, a silver cuff bracelet worth about £160, a platinum diamond ring worth £5,000, car keys and a yellow gold bracelet worth £3,000 were stolen.

Several items were seized by Crime Scene Investigators including the letter opener. Forensic analysis of the letter opener identified a partial DNA profile which did not belong to the victim. This profile was checked on the national database, matching Daniels.

Daniels was arrested in October 2019 and charged.

Further enquiries found bank cards and PIN numbers had been taken in the raid. Withdrawals were made from the cards at three locations in Liverpool. Detectives conducted enquiries in the locality of these transactions including CCTV and ANPR (Automatic Number Plate Recognition) and linked a blue Audi to the withdrawals, belonging to Anthony Hill.

Following extensive telephony and CCTV enquiries, the investigation team linked Daniels, Hill, Reynolds, and Sanders to cash withdrawals and identified regular contact between them at key times surrounding the offence.

Telephony records from Hill, Sanders, and Reynolds, along with ANPR linked to Hill’s vehicle also suggested the trio had conducted reconnaissance around the place of offence on July 27, 2019, shortly before the offence.

Daniels pleaded guilty, with the remaining men pleading not guilty and going to trial.

All were found guilty of conspiracy to commit robbery and having a firearm with intent to commit an indictable offence. They will be sentenced at a later date. A fifth man was found not guilty.

Senior Investigating Officer, Det Ch Insp Jason Richardson, of Lancashire Police, said: “This was a particularly savage and brutal robbery which left the homeowner with serious, life-changing injuries which he is unlikely ever to fully recover from, and understandably left both victims absolutely traumatised by this invasion into their property.

“The damage caused to the victim’s leg, in particular his ankle, was catastrophic and has required a number of operations. He was hospitalised for several weeks and still today, is suffering serious complications following the savage injuries that were inflicted on him by the offenders.

“The attackers, under the impression there was a large amount of money at the address, showed extreme levels of violence to try and get what they wanted – making off with guns, cash, watches and jewellery, which have not been recovered.

“From the moment that the victim was confronted by the gunmen, he was under their complete control and offered no resistance to them whatsoever. The level of violence demonstrated by the offenders was significant, careless and totally unnecessary.

“It is clear these individuals are very dangerous and very violent offenders and I am pleased that the jury reached guilty verdicts and they will be held to account for their actions.

“Both of the victims, and I, would like to thank the investigation team for the dedication and commitment they have shown to identify, and bring to justice those responsible for this shocking crime. Equally, we would also like to offer our sincere thanks to colleagues in the Crown Prosecution Service (CPS) and to the prosecuting counsel for their significant contribution, and hard work, throughout the criminal justice proceedings."