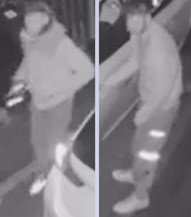 Detectives investigating a suspicious fire in at a block of flats in Waterfoot have released CCTV of two men they want to speak to as part of their enquiries.

Police were called by the Fire Service at around 12.40am on March 22nd to reports of a suspicious fire at a property on Thornfield Avenue.

Thankfully the flats were empty at the time and nobody was injured.

Detectives are treating the incident as a deliberate attack and believe it to be a case of mistaken identity.

A 34-year-old man from Bacup arrested last month on suspicion of arson has been released under investigation.

As part of their ongoing inquiry, detectives have released footage (images right and video below) of two men they now want to speak to.

DC Martin Vernon, of Burnley CID, said: “We are aware that this incident caused a lot of concern in the community at the time, as well as speculation on social media, and we have had a dedicated team of officers working to identify those responsible.

“With that in mind, we now want to speak to the men in the CCTV who we believe may be able to assist with our enquiries. If anybody recognises them, or if the men themselves see this appeal, I would urge them to get in contact with police as soon as possible.

“We believe this to be a case of mistaken identity and the person who we believe to be the target does not reside in the area.”

Anyone with information is asked to email [email protected] or call police on 101, quoting log 34 of March 22nd.