Three men have been sent to prison after the discovery of one of the largest cannabis set-ups ever found in Lancashire - worth £2.6million.

They were sentenced today at Preston Crown Court to a combined total of just over 10 years imprisonment.

The three men were all convicted of producing a class B drug.

Aurel Gjuzi, 25, of no fixed address, was jailed for three years.

Sulejman Lloni, 32, of no fixed address, was jailed for 54 months.

Jacek Pieczur, 25, of no fixed address, was jailed for three years.

Police discovered the cannabis grow in units at the Apex Trading Estate, in Darwen at 10am on Wednesday October 8th, 2019.

There was a total of 4,537 plants at various stages of growth and 27kg of dried cannabis, which together has since been given a street value of £2,606,620.

At the time of the discovery the defendants were living in the unit, on Lower Eccleshill Road, where £2,425 in cash along with a number of mobile phones was also recovered.

The factory was powered by a series of underground cables in order to bypass the electricity supply, which took Electricity Northwest 13 hours to rectify.

After the set-up had been dismantles, some of the equipment being used to cultivate the cannabis, including lamps, reflectors, bulbs, transformers and temperature gauges, was donated to Blackpool Zoo.

DC Vicky Heys, of East CID, said: “This is believed to be one of the largest ever cannabis farms in Lancashire with a substantial street value of cannabis being cultivated there. The sentences given today should send a clear message to other criminal gangs engaging in similar activity that this will not be tolerated.

“We work hard to find and close down illegal factories such as this because of the harm they cause and the associated criminal acts associated with these operations. We will continue to proactively target those people within our community and offenders will be put before the courts and brought to justice, as has been the case here.” 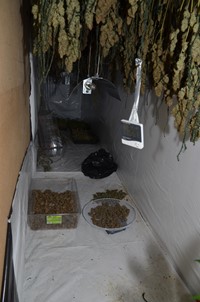 Clive Grunshaw, Lancashire's Police and Crime Commissioner said: “This is a great example of the excellent work being done by Lancashire officers to keep drugs off our streets tackle criminal gangs.

"I hope this sends a clear message to those who are getting involved organised crime that the police have the resources, skills and determination to crack organisations like this and bring their members to justice.

“The public should be re-assured that this type of high level investigation work is taking place. While it is not always visible it is happening and achieving real results like those we have seen in court today."

Anybody with concerns about criminality in their area should call police on 101 or report it online at https://doitonline.lancashire.police.uk. Alternatively, call independent charity Crimestoppers, in confidence, on 0800 555111.