Detectives have released CCTV images of two men they want to speak to following an assault in Blackpool, which left a man with a fractured jaw.

The 18-year-old victim and his friends had been talking to two other men outside a bar on Clifton Street shortly before 2.25am on September 3.

When they got onto Queen Street the discussion initially continued, but then one of the men punched the victim once in the face. That caused him to fall to the ground and momentarily lose consciousness.

The attacker and his friend have then left the area and walked in the direction of Dickson Road.

The victim was taken to Blackpool Victoria Hospital where he required surgery to his face.

No arrests have been made.

Detectives are now asking for the public’s help to identify the men in the CCTV as part of their enquiries. 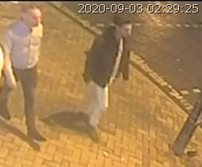 The first man is described as white, of a slim build, around 5ft 9ins and approximately 25 to 30-years-old. He had dark blonde/brown short hair on the sides and back, longer on top and had a trimmed short beard.

The second man is described as a white, 5ft 9ins, bald, of a medium build and approximately 35-years-old.

DC Heather Kelly, of West CID, said: “A young man has been left seriously injured and we need to identify the men in these CCTV stills as part of our enquiries. I would ask anybody who recognises them to get in contact with police. Similarly, I would appeal to the men directly to make contact if they see this appeal.”

Anyone with information should call police on 101, quoting log 0140 of September 3rd, 2020. Alternatively, call independent charity Crimestoppers, in confidence, on 0800 555111.