We are appealing for information after a robbery in broad daylight in Blackpool.

It happened at around 3:20pm last Wednesday (October 7th) when a man, who on his way to deliver takings from a business, was approached by two men on a silver and black scooter (pictured below) whilst he was about to remove cash from his parked car on Knowsley Avenue.

The offenders – who were wearing high visibility jackets and helmets – travelled towards him and then made demands to open the car. He was then assaulted to the head, causing him to fall to the floor, where he was repeatedly kicked.

One of the thieves then reached into the car, taking thousands of pounds and made off in the direction of Beechfield Avenue.

DS Steven Montgomery from Blackpool Police said: “I can’t imagine the distress the victim must have felt as he saw the scooter being driven towards him and when the offenders attacked him. It is fortunate he wasn’t seriously hurt.

“Thousands of pounds that were takings from a business were stolen during the incident and we need anyone who knows anything about it, or the people involved, to come forward. Perhaps you recognise the make and model of the scooter or the build of the people pictured? If so, please get in  contact with us as soon as possible.”

Alternatively independent charity Crimestoppers can be contacted on 0800 555111 or online at crimestoppers-uk.org. 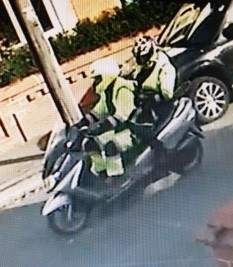