CCTV: Do you recognise this man? 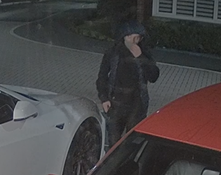 We would like to identify him following a burglary and several attempted burglaries on an estate in Adlington, Chorley.

The incidents occurred at around 2.30am on September 25th on Grove Farm Drive, when a house was broken into and a handbag and a quantity of cash stolen. The offender then attempted to gain entry to other houses and cars on the same road.

We would now like to speak to the man in the CCTV images. He is described as white, wearing dark clothing and a face covering and carrying a dark-coloured backpack with grey panels and red adjusting straps and red trim.

PC Tim Phillips, of Chorley Police, said: “We appreciate that these incidents will have caused a great deal of concern among residents and we would like to reassure those in the area that we are working hard to establish who is responsible.

“As part of our enquiries we would now like to speak to the man in the CCTV images and are asking anybody who recognises him or knows who he may be to get in touch with us straight away. Perhaps you recognise his clothing or the bag he is carrying.

“We would also like to hear from anybody in the area with CCTV or dashcam footage or anybody who has any other information.”

He added: “Nobody should be made to feel unsafe in their own home so this is also a timely reminder to secure your doors and windows to make it harder for thieves.”