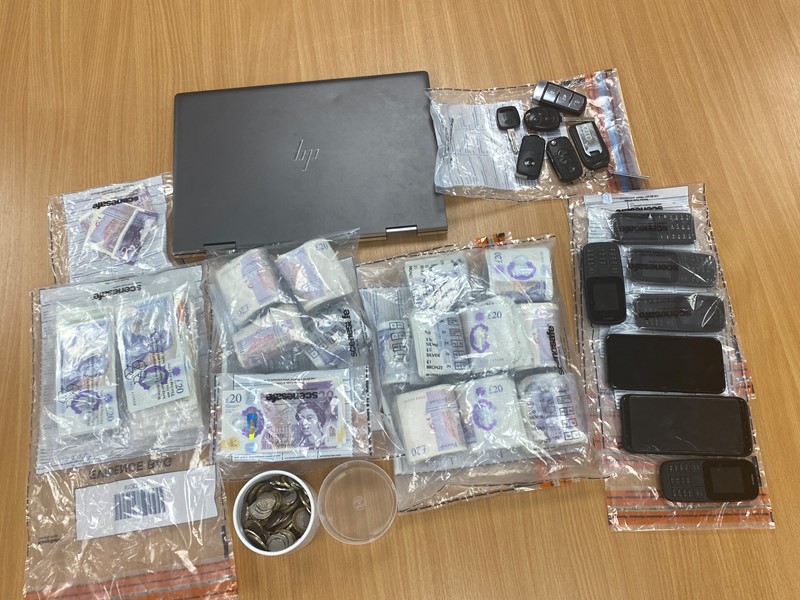 Approximately £20,000 in cash and three cars have today been seized as part of an operation to tackle the supply of class A drugs within Blackburn.

Police attended and executed warrants at two properties – one on Preston New Road, the second on St James’ Road – after intelligence suggested a number of individuals may be dealing drugs from within the premises.

The address on St James’ Road, Blackburn saw evidence of previous drug supply suspected to be heroin and cocaine, along with drug paraphernalia including weighing scales, razor blades and drug wrapping materials – all of which have been seized under the Misuse of Drugs act.

Approximately £20,000 in cash (in total) was seized from both addresses under the Misuse of Drugs Act, including seven mobile phones and a laptop. Three vehicles linked to the supply of class-A drugs within the Blackburn area have also been seized, and a further three sets of keys were found within those cars. Enquiries are ongoing to locate the three further vehicles linked to those fobs.

Jon Cisco, Community Safety Sergeant for Blackburn with Darwen and Hyndburn said, “I’d like to first thank the Blackburn community for helping us to execute these warrants today by providing officers with key intelligence allowing us to disrupt the supply of class-A drugs in Lancashire. We know that drugs have a significant impact on our communities, and it’s often the most vulnerable of our society who become tied into being exploited in the name of organised crime. We are committed to taking drugs off our streets, and these warrants are just one part of our action plan to disrupt and dismantle organised crime groups."

If you, or someone you know has intelligence on the supply of drugs within Blackburn, please call us on 101 or you can report online at www.lancashire.police.uk – if you don’t want to speak to us you can contact Crimestoppers 100% anonymously on 0800 555 111 or visit www.crimestoppers-uk.org

Remember, in an emergency, always dial 999.