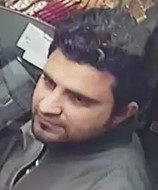 Have you seen this man?

Mohammed Abbas (pictured), 31, from Nelson, is wanted in connection with three assaults which occurred on June 9th and 10th at an address in Nelson. The victim, a woman aged in her 30s, was left with significant injuries.

Abbas is described as Asian, around 5ft 6ins tall, with short black hair and brown eyes. He has links to Blackburn and Nelson.

Insp Carole Langhorn, of Burnley CID, said: “We would like to locate Abbas as part of our enquiries into three assaults. We are now urging anybody who has seen him, or knows where he may be, to get in touch with us as soon as possible.”

Anybody with information is asked to call 101, quoting log number 1425 of June 11th.