Thirty people have been arrested by police in a major operation aimed at disrupting the supply and distribution of drugs in Blackpool. 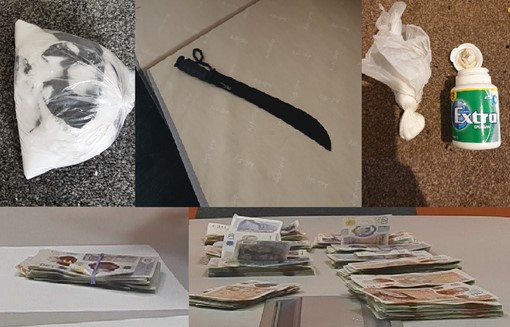 Officers from Lancashire Constabulary carried out a number of raids and executed a series of warrants as part of Operation Enigma, a targeted campaign to disrupt alleged drug-dealing activity by an suspected organised crime group in the resort.

The two-week operation, which started on July 13, ended today (Friday, July 24) with a number of people arrested and charged and a quantity of Class A drugs, with an estimated street value of £25,000, seized. More than £20,000 of cash and three firearms were also recovered.

Det Insp Steve Harry, of Blackpool Police, said: “The activities of drug dealers can have a dramatic effect on our communities. It can ruin lives, fuel other crime, such as burglary and robbery, and can instil fear in our neighbourhoods, especially where the exploitation of children and vulnerable adults is involved.

“These raids are the final strikes in a major operation to tackle the group we believe is responsible for bringing drugs into the resort from the Manchester and Merseyside areas.

“We believe the individuals involved have controlled a number of different drugs lines in Blackpool, with heroin and crack cocaine being dealt to users.

“We hope by doing this activity, not only will we disrupt and deal with the organised crime group, we can warn and educate young people about the consequences of such criminality.”

Operation Enigma was initially launched in April last year following the suspected distribution of drugs in the Blackpool area.

As a result of police intelligence and covert operations, officers were able to identify a number of people linked to the supply of drugs.

Between August, October and January, 12 warrants were executed in the resort, with 16 people arrested and later released under investigation pending further enquiries.

During these searches a large quantity of suspected Class A drugs, including heroin, cocaine, crack cocaine and bulking agent were seized, with a street value of more than £250,000. Officers also found £11,000 in cash and more than 90 mobile phones.

During this month’s operation some of these individuals were re-arrested and charged.

Det Insp Harry added: “The widespread sale, distribution and use of Class A drugs leads to incidents of violence, threats and intimidation, exploitation, as well as family and community tension.

“As such the community expect the police will act in a manner which is proportionate.

“Our operation has been in part supported by local people providing us with information. They are a vital source of intelligence and I would encourage them to keep assisting to help with our investigations.”

Any information can be passed to police via 101 or anonymously by contacting the independent charity Crimestoppers on 0800 555 111.

All the individuals named have been charged and remanded to prison following their first appearance at court. The only exception is Lucy King, who was charged and bailed.

List of those arrested and charged: All the named individuals charged with Conspiracy to supply class A

• A 38-year-old man arrested on suspicion of supplying drugs was released under investigation.

• A 26-year-old woman arrested on suspicion of supplying a controlled drug and is in custody.