Detectives investigating a robbery at an Accrington bookmakers have released images of a suspect they want to speak to. 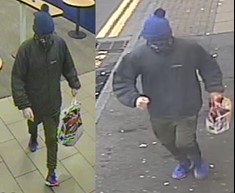 Just before 8.45pm on July 16, the male suspect has entered the William Hill bookmakers on Blackburn Road and waited around until he was the only customer left in the store.

He has then followed the lone female employee back behind the counter and pushed her, before demanding that she opened the safe.

When he discovered that it was empty, he then demanded money from the till.

The attacker pushed the victim into the kitchen area and but she managed to lock herself in the toilet and call the police.

The attacker left the bookmakers at 8.52pm with approximately £365 in cash and walked along Blackburn Road and up the ramp to Accrington Train Station.

The offender, who spoke with a local accent, is described as white, 5ft 10ins, of slim build and in his late 30s to early 40s.

He was wearing a bright blue woolly hat with a dark blue bobble on the top, a black and white scarf tied over his face, a grey waterproof style jacket, olive green tight tracksuit bottoms and bright blue New Balance trainers. He was carrying a white carrier bag with a union jack on it.

Before the incident he was seen walking along Hyndburn Road, through McDonalds carpark, underneath the viaduct and onto Union Street. He then walked underneath the Arch of the Town Hall before making his way to William Hill.

No arrest has been made so far and officers are appealing for anyone who recognises the man in the CCTV images to come forward.

DC Nicholas Barker, of Blackburn CID, said: “This was a terrifying incident which left the victim very shaken. I would ask anybody who recognises the man in the CCTV to contact police on immediately.”