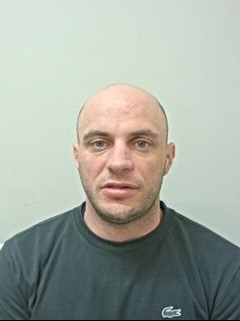 Have you seen Sean Corless?

Police want to speak to the 35 year old from Lancaster in connection with alleged offences of kidnap and threats to kill relating to an incident on 20th January.

Corless is described as being 5ft 4in tall, of stocky build. He is partly bald with very short black hair and blue eyes. He has a tattoo of word “COCO” on inside right forearm.

He has links to Morecambe and Lancaster.

PC Shaun Foster of Lancaster Police, said: “Corless is wanted in connection with some serious allegations. If you have seen him or know where he might be, please get in touch with us as soon as possible.

“I would also like to stress that anyone found to be harbouring or protecting him, will be arrested.”