UPDATE: Boy arrested while section 60 remains in place in Fulwood 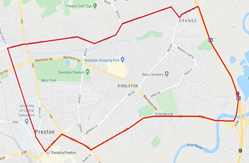 A boy has been arrested following reports someone had been seen with a knife in Preston this evening (Monday, January 27th).

We were called at around 4.55pm to reports someone had been seen with a knife on Blackpool Road, before making off in the direction of Plungington Road.

There were also reports that someone may have been assaulted, though nobody reported any injuries.

A 15-year-old boy from Preston has since been arrested on suspicion of affray, and remains in police custody.

A second teenage boy has been identified as the victim of an assault, though he has been spoken to by officers and it appears he has not suffered any serious injuries. It is believed he and the arrested boy are known to each other.

A section 60 remains in place around Blackpool Road.

Insp Azz Khan, of Preston Police, said: "Following our earlier appeal we have made an arrest and the boy in question remains in custody at this time.

"We have also identified someone as the victim of an assault, but thankfully it appears his injuries are not serious.

"We would continue to reassure people that we do not believe this incident is linked to the assaults which occurred in the Deepdale area yesterday (Sunday). However, patrols have been increased in the area and a section 60 remains in place tonight."

The section 60 came into effect at 6pm and will last until 3am tomorrow (Tuesday) and will cover the area shown on the map.

A Section 60 gives us the power to search people or vehicles without suspicion in an area where we believe violence could take place.