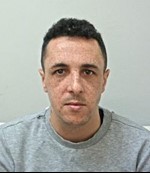 As a result of our social media appeal yesterday, Kingsley Cairns, who was wanted for questioning following a burglary in Penwortham, has handed himself in.

We are now urging a second man, Leroy Allen (pictured), to come forward. Allen, 33, is mixed race, 5ft 7ins, of medium build with brown eyes and short cropped hair. He has links to the Moor Nook, Grange, Brookfield and New Hall Lane/Ribbleton areas of Preston.

The burglary took place at Penwortham’s 1260 Craft & Crust Bar & Restaurant on 21st January shortly after midnight. A third man, Gary Hampson, aged 20, has been found guilty of burglary in connection with this incident and was sentenced at Preston Magistrates' Court on 24th January.

PC Paul Moseley said: “Cairns handed himself in due to the pressure from our social media appeal, which underlines the vital part the public play in helping the police with their enquiries. Thank you to everyone who shared this appeal.”

If anyone has information regarding Allen’s whereabouts, please email [email protected] or call 101, quoting log number 459 of 21 Jan.