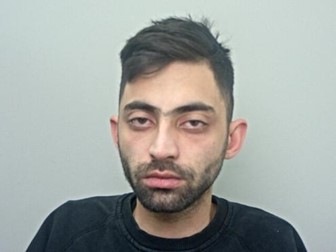 We are appealing for the public’s help in locating a wanted man.

Mohammed Rehan Awan, also known as Ronnie, is wanted by police in connection with an aggravated burglary on Devon Road, Blackburn on January 29.

The 30-year-old formerly of Livingstone Road Blackburn is also wanted for absconding from HMP Kirkham since October 25.

He was jailed in June 2017 for 10 years for possession with intent to supply class A drugs. Enquiries have been ongoing in tracing the absconder who is believed to also have links to Clitheroe and Nelson.

Awan, who also goes by the name Rahan Malik, is described as around 175cm tall, of slim build, with short black hair, and a full beard and moustache.

Officers are appealing for information leading to his arrest and we would also appeal directly to Awan to contact police.

PC Mark Slater of Lancashire Police said: “If Ronnie sees this appeal we would advise him to hand himself in to police immediately.

“And if members of the public have any information on his whereabouts we would urge them to let us know.”

Anyone with information is asked to contact police on 101 quoting log number 0374 of January 29th. Information can also be provided anonymously by contacting Crimestoppers on 0800 555 111.