Young Citizen of the Year 2020 named

A 14-year-old boy from Blackburn has been named as the High Sheriff of Lancashire’s Young Citizen of the Year 2020. 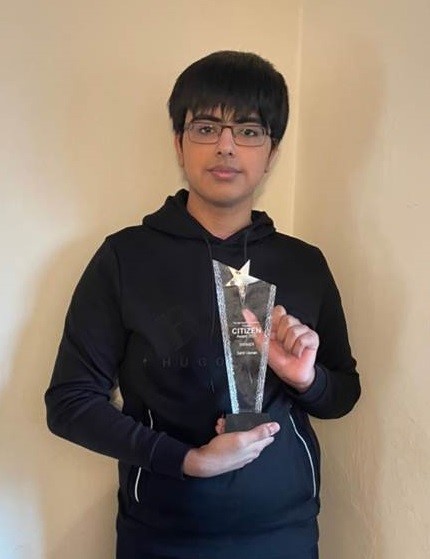 Sahil Usman (pictured) topped a list of more than 45 young and inspiring people from across the county who have made a real difference in their community.

This week Sahil, along with the runner ups, were sent their certificates and a specially commissioned brochure by the High Sheriff, outlining their achievements. An event to present the awards was cancelled earlier this year due to the coronavirus pandemic.

Sahil was praised by judges for his extensive work helping young cancer patients, while also fighting his own battle with Leukaemia. Despite becoming increasingly ill and going through intense chemotherapy his sense of compassion and his need of helping others took priority.

For two years he has organised a project which delivers Christmas presents for children who have to spend the festive season in hospital because they are too poorly to go home.  This is an annual project that takes Sahil six months to raise money, buy, wrap and deliver more than 100 presents.

Sahil, who has been called an inspiration to other young people, is also involved in creating presentations that are delivered within schools and local organisations to raise awareness of the impacts of cancer in young people by giving an insight into his own experiences.

He also hosts a local radio show which has featured calls from families thanking him for talking about the serious topics that aren’t always spoken about and how much knowledge they have gained from the show.

Ralph C Assheton TD DL, the former High Sheriff of Lancashire, said: “Sahil’s determined work, over an extended period of time to both raise money and awareness make him a very worthy winner of the award.”

A panel of judges including the former  High Sheriff, the Lancashire Partnership Against Crime , Russell Millhouse, Regional Projects Lead from the University of Central Lancashire and the former High Sheriff Rodney Swarbrick, who initiated the award, also selected a second and third place.

Runner-up Delilah Mawdsley, who is just six-years-old was congratulated for having 12 inches of her hair cut off to donate to the Little Princess Trust which makes real hair wigs for children and young people with hair loss.

Delilah, from Cleveleys made the donation in memory of her school friend Charlie Jordan, who died from an aggressive brain tumour aged 11.

The youngster also helped to raise £1150 for Brian House Children’s Hospital in Blackpool who looked after Charlie in his final days.

A joint award was given for third place going to double entrants Tom (11) and Jack (9) Mayoh, from Darwen and nine-year-old Thomas Sibley, from Croston.

Brothers, Tom and Jack, are known in the community of Blackburn and Darwen as “The boys in the shorts” following the tragic loss of their mum, Louise Mayoh aged 39, in July 2018.

Following the death of their mum, the boys decided to raise money for East Lancashire Hospice where she spent the latter weeks of her life. They elected to wear shorts for six months, including throughout the winter months, with an aim to raise £1000. Since then the boys have continued to fundraise and have reached a running total of £31,000, and they are still going - and still wearing shorts.

In joint third place Thomas Sibley, was recognised for his fundraising efforts for St Catherine’s Hospice who cared for his Dad sadly died in December 2018.

Thomas spent much of 2019 planning a fundraising event in his dad’s memory. He wrote letters to celebrities requesting items for an action at an event in memory of his dad.

Thomas originally set a modest target of £100 but over the following months, a total of 150 items arrived including signed shirts from David Beckham and Rafa Nadal, a cap from Sir Andy Murray, a signed card from David Attenborough and mounted discs from Olly Murs and Little Mix. The evening of the fundraiser raised £21,000 and Thomas became known as the ‘Hospice Hero’.

Lancashire Constabulary’s Deputy Chief Constable Terry Woods who was due to present the awards said: “I would like to congratulate this year’s deserving winner Sahil, and the runner ups Delilah, Tom, Jack and Thomas. They have made outstanding contributions to their communities and their hard work and determination to their causes is an inspiration.

“It is an honour to be part of the Young Citizen of the Year Award. Every year we are impressed with the standard of the entries and this year is no different. We have a lot of inspirational young people in our county and it is a pleasure to recognise them in this way.”

Russell Millhouse, Head of External and Public Affairs, at the University of Central Lancashire added: “It is always a very tough decision to place the many and varied achievements of these standout young citizens into any order, especially as these are individual to both the beneficiaries of their efforts and the nominees themselves.

The judges have seen another stellar group of selfless and committed young people – some as young as six – from across the county, making real and lasting impacts upon people’s lives. Our winners, Sahil, Delilah, Thomas, Tom and Jack, are a credit to Lancashire, as are their fellow nominees.”