​The parents of a teenage boy fatally stabbed at a house in Preston have paid tribute to their son. 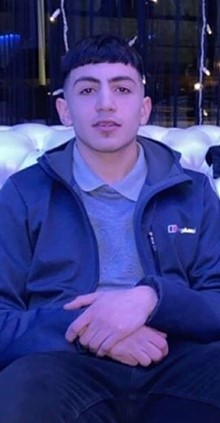 Officers were called to an address in Chatham Place at 5.43pm on Wednesday (December 23) where the victim, 16-year-old Sarmad Al-Saidi from Preston, was found with stab injuries to his chest and legs.

He was initially treated at the scene but was later transferred to hospital where he died on Sunday (December 27).

In a tribute Sarmad’s parents said: “We are absolutely devastated by the sudden loss of our beloved son.

“Sarmad was very family-oriented and was very close to his two brothers, who miss him dearly.

“Our son will be remembered for being a smart, helpful, forgiving and compassionate boy who would help anybody who needed it. He was a very happy boy who always wore a smile on his face wherever he went. That is how we will remember him.

“As a family, we have been moved by the large amount of warm messages we have received about our much-loved son and we are grateful for each and every one of them.

“At this difficult time our family would like to appeal for calm, love, peace and prayers in the name of Sarmad.

“We would also ask that our privacy is respected at this time.”

Yesterday, three males - Jamie Dixon, 18, of Clayton Avenue, Leyland, and a 16-year-old boy and a 17-year-old boy who cannot be identified for legal reasons, appeared before magistrates in Preston charged with Sarmad’s murder. They were all remanded into custody and are due to appear at Preston Crown Court tomorrow (December 30).

A 20-year-old man, a 28-year-old woman, both from Preston, and a 36-year-old woman from Leyland all previously arrested on suspicion of assisting an offender have since been released under investigation.

DCI Lee Wilson, of the Force Major Investigation Team, said: “My thoughts remain with Sarmad’s family and friends who are still coming to terms with his untimely death.

“While we have now charged a man and two teenagers with Sarmad’s murder, our investigation is very much ongoing and I would ask anybody with information that could assist us to come forward.

“I realise that this incident will have caused a great deal of concern in the community and I would like to reiterate Sarmad’s parents’ appeal for calm.”