A taxidermy dealer who illegally traded in critically endangered species has been sentenced to 56 weeks in jail. 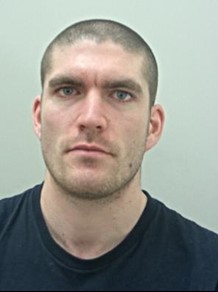 In December 2017, The UK National Wildlife Crime Unit and Lancashire Police launched a joint investigation into the dealings of Arron Halstead (pictured) after being alerted to the fact that he offered to sell a black rhino skull, a sawfish rostrum and a sperm whale tooth without the required permits.

As a result, in January 2018 officers executed search warrants at the 29-year-old’s home address and business address in Burnley as part of Operation Rambler - a complex two-and-a-half-year investigation.

Officers seized a wide range of taxidermy related items including stuffed tiger cubs, rhino horns, rhino heads and three elephant tusks, which included one in excess of two metres in length that is understood to be one of the largest ever seized in the UK.

Other items included the rhino skull, sperm whale tooth and the sawfish rostrum that Halstead had offered to sell.  Officers also seized a mass of paperwork related to his trade in taxidermy.

It was clear to the investigating officers that Halstead was trading legally in many taxidermy specimens, but they suspected he was using his legal trade to front his criminal activity.

Following the warrant, Halstead was arrested but declined to provide explanations for any of the seized items. 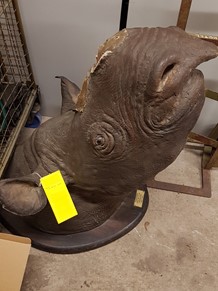 Officers undertook a painstaking analysis of the paperwork and the data downloaded from Halstead's IPhone and uncovered WhatsApp messages showing that he had been trading extensively in taxidermy.

Although the majority of his trading had been legal, officers found comprehensive evidence showing that Halstead was also involved in an illicit trade with dealers from around the globe, which he was trying to hide amongst his legal dealing.

Halstead had used contacts in Spain to broker the sale of rhino horns to buyers from China, falsifying documentation for a cover story, he drove to Calais twice where he met the buyers and sold four rhino horns for significant amounts of cash.

At the time of the warrant, Halstead was arranging to sell two more horns, which officers found in his freezer. They also uncovered messages indicating the Halstead was actively trying to source further rhino horns, which he intended to sell to his Chinese contacts and messages showing that he was trying to find buyers for the elephant tusks.

As the investigation progressed, Halstead’s activities also attracted the attention of Interpol and the Dutch Police. That was after officers found that Halstead had acquired tiger skulls from another dealer based in the Netherlands, which he was selling to other contacts. 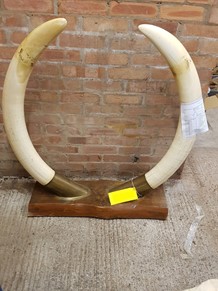 Initially Halstead pleaded guilty to the prohibited offering for sale a rhino skull, sperm whale tooth and sawfish rostrum and entered not guilty pleas to all other charges, so the case was listed for trial.

However, at Preston Crown Court on June 23rd Halstead entered guilty pleas to a further six offences contrary to the Control of Trade in Endangered Species (Enforcement) 1997, relating to the prohibited trade in tiger skulls, elephant tusks and rhino horns, which are some of the world’s most critically endangered species.

This is the third occasion that Halstead has come to the adverse attention of the police and National Wildlife Crime Unit. In December 2015 Halstead was given a 24 week prison sentence for the prohibited trade in other endangered species.

It is believed his latest conviction will make him the first person in the UK to be imprisoned twice for offences under the regulations.

Halstead will return to Preston Crown Court in January for a Proceeds of Crime Act hearing where officers intend to apply for a Serious Crime Prevention Order and a confiscation order for all items seized.

If it is successful, it is hoped some of the items will be donated to museums, while others will be used by the Lancashire Constabulary Rural Crime and Wildlife Team during their educational roadshows across the county. 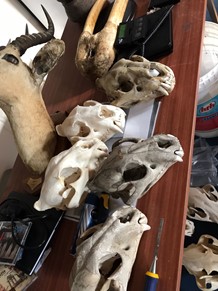 Andy McWilliam, investigations officer for the National Wildlife Crime Unit, said, "This is the third occasion that I have dealt with Halstead for similar offences in under 10 years. He is an extremely knowledgeable individual, but sadly his main concern is profit.  He is well aware that some of the species he profits from are threatened with extinction. He is also aware that these species are protected by international law.  He knows that is feeding a demand and that his illicit trading may have a direct impact on the survival of some of the world's most threatened species. The sentence imposed on Halstead should be a warning to anybody who chooses to trade illegally in endangered species ".

PC Nigel Keates, a Lancashire Constabulary wildlife officer, said: “I welcome today’s sentence, which comes at the end of a long and complex investigation. Halstead profited from trading in the world’s critically endangered species and his actions were both selfish and abhorrent. I hope this conviction and subsequent sentence sends out a strong message that Lancashire Constabulary will not tolerate this kind of behaviour and will follow the evidence to all corners of the globe when investigating offenders who seek to benefit from this despicable trade.”

Supt Andrea Barrow, of East Lancashire Police, said: “We take all forms of wildlife crime seriously and I’m sure this case, involving critically endangered species, will be particularly concerning for the wider public. This investigation is a great example of partnership working and I am pleased we have managed to bring this individual to justice.”

Anyone with information on wildlife crime in their area can call police on 101 or report is online at https://doitonline.lancashire.police.uk/