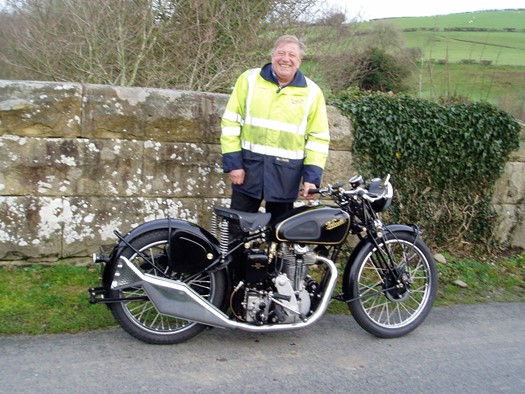 The family of a man who died after coming off his motorbike have paid tribute to him.

We were called at 13:41 hours on Sunday (6 October) to the report of a road traffic incident on the A6 near to the junction of Tarn Lane involving a motorcycle.

The rider, 67 year old Peter Foster from Wray, came off his Norton Model 18 bike and fell to the ground.

He was travelling with a group of Vintage motorcycle riders at the time.

The ambulance and air ambulance attended but Peter was sadly pronounced dead at the scene.

"Peter Foster could certainly be described as a unique personality.

“Born in Leeds but brought up in various countries in Africa, including being schooled in Kenya where he learnt to speak Swahili he returned to the UK aged 15.

“After leaving school he settled in Southampton where he started his first job as a map maker with the Ordnance survey this was also where he met his first wife and his two sons Richard and Philip were born.

“However it wasn't long before he followed his own father into engineering, which was a passion that would stay with him until the end. He worked all over the world including living for a short while in California, where he worked on the Space Shuttle.

“On his return to the UK Peter was immensely proud to have also worked on the famous Flying Scotsman.

“Known as "Fossie" to his friends and family Peter was much loved and respected in the village of Wray which is where he called home.

“He was a talented amateur artist and often sold pictures, giving the proceeds to charity including Blood Bike, Air Ambulance and Help for Heroes.

“His real passion was in classic British motorcycles. He would regularly organise bike rides and rallies with his friends all over the UK and Northern Europe, and was instrumental in founding a monthly meeting called "Bike Night" in Wray.

“Most of all Peter was a larger than life personality, he was devoted to his family and large circle of friends, always the first to lend a hand whenever it was needed and was very much game for a laugh.

“Peter was a much loved husband, father, brother, uncle and grandfather and although with us in heart and mind he has left a void and will be greatly missed by all who knew him.”

Anyone with who witnessed the incident and hasn’t already spoken to us should call 101 quoting log number 746 of 6 October.