The family of a woman who died in Walton-le-Dale yesterday have paid tribute to her.

We were called at 7:24am yesterday (14 May) to the report of a two vehicle collision on Duddle Lane near to the junction with Severn Drive.

It involved a Volkswagen Crafter and a Fiat Panda.

The driver of the Fiat, who can now be named as Connie Sharples, 94, from Walton-le-Dale was found with serious injuries and was sadly pronounced dead at the scene.

The driver of the Volkswagen, a 37 year old man from Preston was arrested on suspicion of driving whilst over the prescribed drug limit and causing death by dangerous driving. He has since been released under investigation pending further enquiries.

Road closures were in place for around three hours.

“We continue to appeal for witnesses and ask that anyone who saw the collision gets in touch with us as soon as possible.”

Anyone with information should call 101 quoting log number 189 of 14 May.

Connie’s son Roy Lund has paid the following tribute to her:

“Connie was a VERY independent woman who at age 17, ran off to join the ATS during WW2.

“She ended up working with an all women's unit, the 93rd Searchlight outside of London.

“She really enjoyed dancing (twice a week) and loved to watch Strictly Come Dancing on a Sunday evening.

“Mum was a parishioner at St Aidens church and loved to walk all her life.

“Her fitness and health were always paramount to her.

“Amazing lady who was already planning her 100th birthday party.

“She will be sadly missed by all who had the privilege to know her!” 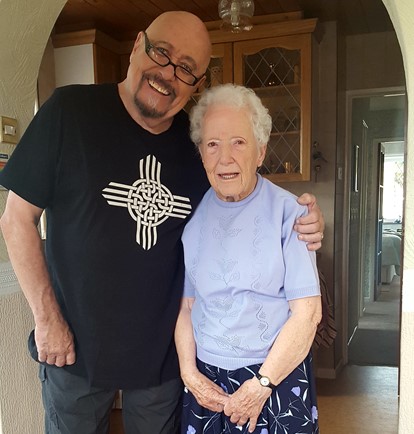 Connie pictured with her son