A drug dealer who tortured and killed a vulnerable man has today (Thursday, March 14th) been jailed for life.

Atif Muhmood (pictured below) controlled and bullied his victim Christopher Moore as part of his drug dealing activities and subjected him to horrific injuries in his own home.

The level of torture inflicted on Christopher Moore by Atif Muhmood eventually led to his death.

Muhmood, 39 of Bankhouse Road, Nelson was convicted today (Thursday, March 14th) of murder following a trial at Preston Crown Court. He had earlier pleaded guilty to supplying Class A dugs and was given a six year concurrent sentence for that offence.

He will serve a minimum of 32 years before he can apply for parole.

Police were called by the Ambulance Service around 10pm on June 20th last year to reports of a sudden death in Derby Street in Nelson.

Officers attended and the body of 45-year-old Christopher Moore was sadly found at the scene. The death was initially treated as non-suspicious, but following further investigation and a Home Office post mortem, Mr Moore was found to have suffered a number of horrific injuries.

Temp Detective Supt Andy Cribbin, Head of Major Crime at Lancashire Constabulary, said: “Atif Muhmood carried out a depraved and prolonged attack on Christopher Moore that was targeted against a vulnerable defenceless man in his own home. Mahmood had bullied Christopher as part of his drug supplying activities and had taken control of his house in the days leading up to his death.’

“Christopher’s family have had to endure not only his loss, but the lies told by Mahmood during his police interviews and then giving no explanation as to his actions during his trial. Their dignity and calmness throughout is to their great credit. My thoughts are with Christopher’s family and friends as they continue to struggle to come to terms with their loss.’

“I would like to thank the jury for their careful deliberations in what was a distressing case for them to hear.”

Christopher’s family said: “We would like to thank the police, prosecution team, Judge Brown and everyone else behind the scenes.

“The death of Chris has caused us immense pain but this pain is nothing in comparison to the pain and suffering that Chris must has felt. Atif Muhmood’s actions alone were inhumane and although he may have felt invisible at the time, murderers always fall.

“Atif Muhmood didn’t even have the courage to take the stand and answer a single question, that's because he was as much a coward now as he was then only picking on a 7 stone vulnerable man, not someone who could fight back.”

“Today's verdict is the right one, without question. Atif Muhmood is a monstrous sadistic animal and we are safer knowing he is going to spend many years in prison.” 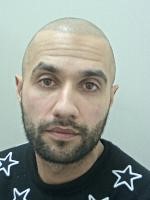