THE NEW West Division Police Headquarters in Blackpool has been officially opened today (Wednesday 26 June) in memory of the fallen officers across Blackpool, Fylde, Wyre, Lancaster and Morecambe.

The National Association of Retired Police Officers (NARPO) was joined by families of fallen officers when they announced the building open.

Lancashire Constabulary’s Chief Constable Andy Rhodes said: “It is fitting that the building is open in memory of our fallen officers in West Division. As we look ahead, we need to remember those that have lost their lives in the line of duty or otherwise.

“Our officers carry out acts of bravery on a daily basis and today we remember those who made the ultimate sacrifice with pride and admiration.”

Christine Pickard, Chairperson of the Blackpool and District Branch of NARPO added: "The National Association of Retired Police Officers represents over 90,000 retired Police Officers and their widows and widowers. The main objectives of NARPO are protecting members’ rights and promoting measures for their welfare. Retiring from the Police Service can bring many challenges, and NARPO is there to help members manage work, leisure and starting life anew.

“It is a tremendous honour for the Blackpool and District Branch of NARPO to be asked to open the new police station especially as it is dedicated to the memory of fallen officers, starting with the entrance in Gerry Richardson Way.”

Building started on the site of the new headquarters, located on Gerry Richardson Way off Clifton Road, in December 2016. Construction was completed in June last year, with staff moving over from Bonny Street Police Station on a phased basis. The front counter opened its doors on 23 July 2018. 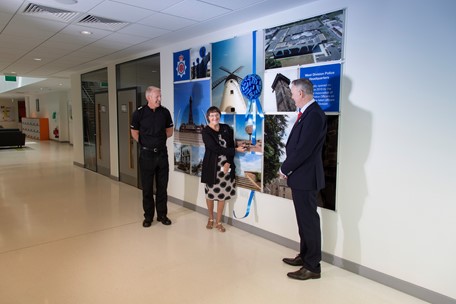 The investment, which is the biggest in the force’s history, was funded as part of the Police and Crime Commissioner’s (PCC’s) capital programme.

Clive Grunshaw, Lancashire Police and Crime Commissioner, said: "It is my honour to be able to attend the opening of the West Division Police Headquarters alongside families of fallen officers who have died in service. Our police officers put their lives on the line daily and this act of remembrance is a small token of our appreciation for their sacrifice.

"The West Division Police Headquarters is an example of investment in policing in Lancashire, but also of investment in the local community. As Lancashire's Police and Crime Commissioner, I am launching 'Backing Lancashire', an approach to procurement and decision making which helps our communities thrive by investing in the County, its businesses and its people.

"Throughout the building of the new Headquarters, over £6.3m was invested back into Lancashire businesses with around half of all money spent on the project invested within 20 miles of the site".

The building provides a base for some of the local policing and immediate response teams, an investigations hub and 42 custody cells. It also houses a range of specialist teams serving the whole of the division, which covers Blackpool, Fylde, Wyre, Lancaster and Morecambe.

A new front counter opened at Blackpool Council’s Municipal Building on Corporation Street in October 2018, ensuring a service continued in the heart of the town. 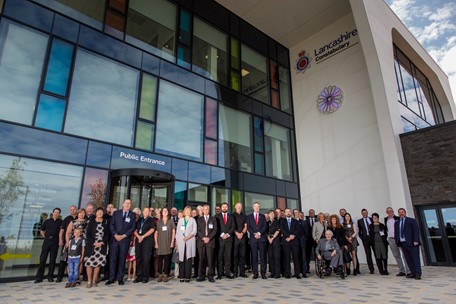 Pictured here are representatives from NARPO, families of fallen officers, contractors who worked on the build and staff from Lancashire Constabulary. Also attached is an image of Christine Pickard, Chairperson of the Blackpool and District Branch of NARPO, cutting the ribbon at the official opening. She is pictured alongside Lancashire Constabulary’s Chief Constable Andy Rhodes and Clive Grunshaw, Lancashire Police and Crime Commissioner.