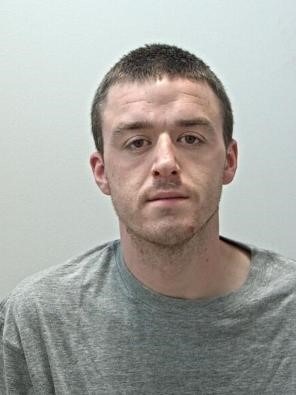 A Manchester man has been jailed for five years following a cash-in-transit robbery in Blackpool.

Thomas Walker, 28, of no fixed address, Manchester, was handed the prison term and an extended two year licence at Preston Crown Court on Monday 1 July.

Walker was handed five years for the robbery, 18 months for possession of a knife and three months in respect of the drugs. His sentences will run concurrently.

At around 1:35pm on Easter Monday, a security guard was approached by a man as he was delivering cash to the Pleasure Beach at the Withnell Road entrance.

He received a minor stab wound to his back during the incident.

The offender made off from the scene with the cash security box.

The empty cash box was later recovered in a bush on the Promenade.

Police launched a manhunt to trace Walker in connection with the offence.

Following a press appeal, he was located in Bolton on 26 April.

DS Lee Kelly of Blackpool CID: “This was an incredibly serious incident which took place in broad daylight on one of the resort’s busiest weekends of the year. Understandably this caused alarm to those who witnessed it and was a traumatic experience for the security guard.

“I am satisfied with the sentence which will see Walker behind bars and hope it goes some way to helping the victim who was subject to this ordeal.”