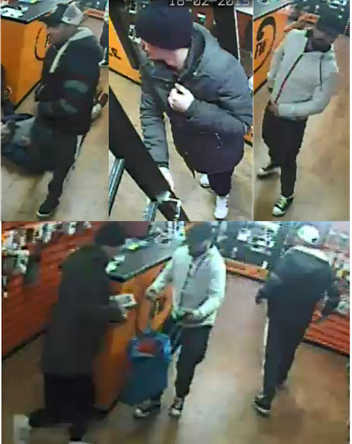 Detectives are appealing for witnesses following a robbery at a mobile phone shop in Chorley.

Around 3.10pm yesterday (February 18th) it was reported that a man entered Fone World on Market Street, Chorley pretending to be a customer.

He engaged the shop worker, who was alone at the time, in conversation before two other men joined him in the shop.

The first man then suddenly punched the victim - a 52 year old man from Preston - to the floor. The other two began taking phones from behind the counter and the window display.

The victim was then dragged into a rear room before he was punched in the face again.

The offenders are all described as male, aged 20 to 40-years-old.

The second male was shorter and stockier than the first. He was wearing a white zipped hoody top, a baseball cap and had dark short beard.

The third male is described as tall and thin wearing and was wearing a dark coat and a black woolen hat.

The victim was taken to hospital following the attack but was released after treatment.

A large number of second hand mobile phones were taken.

Detective Sergeant Jerry Sturgess, of Chorley CID, said: “We are appealing for information following a vicious robbery in the town centre.

“Luckily the shop keeper wasn’t too seriously hurt but he has been left extremely shaken by his ordeal.

“This attack was in the middle of the afternoon and someone must have seen something.

“I urge anyone with any information at all to come forward.”

Anyone with information about the incident or who recognises the people in the photos can contact police on 101 quoting log reference 0821 of the 18th February.

Alternatively, they can contact Crimestoppers anonymously on 0800 555 111 or online at Crimestoppers-uk.org. No personal details are taken, information is not traced or recorded and you will not go to court.