WE can now sadly confirm that the body found at Accrington Cemetery at the weekend is that of missing teaching assistant Lindsay Birbeck.

Lindsay, 47, went missing from home on August 12th and after the discovery on Saturday evening (August 24th) of a woman’s body at Accrington Cemetery, Burnley Road detectives launched a murder inquiry. We have now officially identified the body as that of Lindsay.

Her family have been informed and continue to be supported by family liaison officers. Our thoughts remain with them at this time.

A post mortem examination has been conducted and shows that Lindsay died as a result of compression of the neck.

We are aware of rumours circulating on social media about what may have happened to Lindsay and for the family’s sake we once again would urge people not to speculate as this is causing her loved ones significant additional distress at what is clearly an extremely difficult time for them.

A large team of detectives, uniformed officers and staff are working on the enquiry to establish what happened to Lindsay after she went missing and to identify who was responsible for her death. No arrests have been made at this stage.

Detectives are carrying out a review of CCTV, doing house to house enquiries and trying to piece together Lindsay’s movements since she was captured on CCTV on Burnley Road at just after 4pm on Monday, August 12th.

He said: “This is a fast moving inquiry and I have a team of detectives and staff working around the clock to try and find out what has happened to Lindsay and to identify who has killed her.

“I would like to thank the community for their response to our appeals so far and to continue to urge anyone who has any information which could assist us to come forward.

“I need to find out where Lindsay has gone after she was last seen on CCTV on Burnley Road at just after 4pm on August 12th and what has happened to her. I would continue to appeal for anyone with CCTV, especially in the area of Peel Park Avenue, to come forward and I would also like to speak to anyone who thinks they saw Lindsay, or anyone matching her description, or who saw anything suspicious in that area on the afternoon or evening of August 12th to come and speak to us.

“I would also like to speak to anyone who has seen anything suspicious in or around the cemetery area after August 12th or anyone who has any drone footage or dashcam footage which could assist.

“Please come forward with any information, no matter how insignificant you may think it is as it could help provide the answers Lindsay’s family desperately need.”

As a reminder Lindsay was last seen wearing a purple Rab bubble jacket, black leggings, a white shirt with blue pin stripes and black trainers with a white sole. Her Huawei mobile phone is also missing.

We would urge anyone with information to submit it through the major crime web portal at https://mipp.police.uk/operation/0401020119E06-PO1 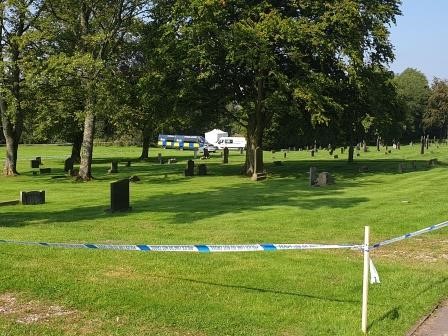 The scene at Accrington Cemetery