A DRIVER has been jailed for three years after knocking down a man and leaving him partially paralysed.

Jake Smith was driving his Seat Ibiza at speeds of up to 68mph in a 30mph zone when he collided with Wilf Walker, 70, as he was walking his dog close to his home on Blackburn Road, Great Harwood.

Smith’s car then collided with a wall and several parked vehicles.

The collision happened at shortly before 9pm on 17th August last year.

As a result of the collision Mr Walker received injuries which were life changing.  He is now paralysed from the chest down and also has only small movement in his arms.  He needs round the clock care and has been forced to move from his home of 37 years.

He has also been left unable to stroke his beloved pet dogs. 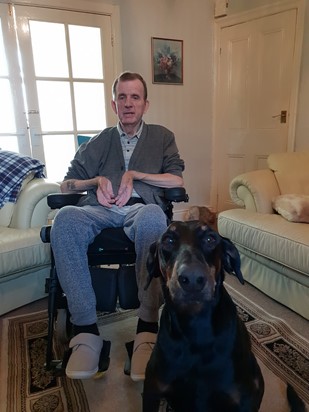 Wilf Walker with Max the Doberman

At court on Wednesday (Oct 31st) Smith was jailed for 3 years with a 5 year driving ban which will commence upon his release.

His car had bald tyres which were also at the incorrect tyre pressure.

Insp Claire Pearson, of East Police, said: “This collision left Mr Walker with life changing injuries and shows the absolutely devastating consequences that speeding and drug driving can have on peoples’ lives.

“This significant custodial sentence reflects the gravity of Jake Smith’s offending and I hope will serve as a warning to other drivers to be responsible when they get behind the wheel of a car.”