THE ROAD leading to the new West Division Police Headquarters in Blackpool has been named after fallen superintendent Gerry Richardson. 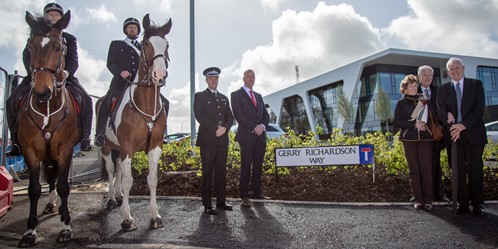 Gerry Richardson Way has become the name of the access road, which was previously unnamed, off Clifton Road, as the new headquarters nears completion.

Supt Richardson was killed in the line of duty, aged 38, after being shot while attending an armed robbery in Blackpool on 23 August 1971.

“It is fitting that this road is named after Supt Richardson – a leader whose bravery we will never forget.

“The naming of this road will act as a reminder to our officers and the public of the sacrifice he made that day. It also acts as stark reminder of the risks that our officers face on a daily basis in the course of their duties.”

Supt Richardson and PC Carl Walker attended a robbery on The Strand 46 years ago, which culminated in them chasing the robbers on foot. PC Walker was shot in the thigh before Supt Richardson was shot twice in the stomach at point-blank range. He sadly died of his injuries later that day. PC Walker was injured but survived.

Born in Blackpool, Supt Richardson was passionate about youth work. At the time of his death, he was a member of Blackpool North Rotary Club. His colleagues in the club set up the Superintendent Richardson Memorial Youth Trust in his memory.

The trust seeks to promote youth development by supporting young people, aged 25 and under, to attend courses and activities of an educational, cultural, sporting, adventuresome or character-building nature.

“Gerry’s widow Maureen and her fellow members and patrons of the Superintendent Richardson Trust are delighted and very proud that Gerry is remembered with such affection.

“This will help the Trustees to ensure that Gerry’s legacy lives on, thus benefitting many young people in the future.”

"Naming the road after Gerry Richardson will serve as a permanent reminder of his bravery that day and the courage our officers show daily in order to keep the people of Lancashire safe and out of harm's way."

Both Supt Richardson, posthumously, and PC Walker received the George Cross in recognition of their bravery. Seven other officers involved in the incident also received gallantry awards including the George Medal, British Empire Medal for gallantry and the Queen’s Commendation for brave conduct.