A WOMAN has been convicted of murdering her baby daughter.

She was also convicted of three counts of Section 18 assault and an offence of child neglect. These offences were committed some years ago in relation to another child.

She will be sentenced at Liverpool Crown Court on Wednesday 11th April 2018.

Police were called by the Ambulance Service in the early hours of Wednesday, April 19th last year after they attended an address on Slater Lane where seven month old Amelia Crichton (pictured below) had been found unresponsive.

The baby suffered cardiac arrest and was taken to Royal Preston Hospital but later transferred to Manchester Children’s Hospital where she sadly died on April 21st. A post mortem examination revealed that the child died as a result of head injuries.

Detective Inspector Simon Cheyte, of Lancashire Constabulary’s Force Major Investigation Team, said: “I am satisfied with the conviction and I would like to thank the jury who returned their unanimous verdicts in under two hours of deliberation.

“Jennifer Crichton has never given a satisfactory account of what happened at the address on that fateful night and we may never know exactly what happened which led to Amelia’s injuries. What is clear is that that she suffered catastrophic and deliberate injuries which she could not survive and the only person who could have caused those injuries is Jennifer Crichton.

“The person who should not be forgotten in this is Amelia. She should have been able to look to her mother for the protection and love of a parent. Instead this defenceless child found herself subjected to horrendous abuse and the injuries which led to her death. 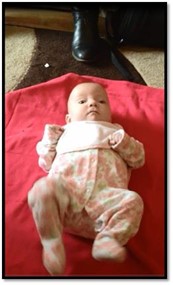 “In relation to the conviction for assault on the other child this was subject to a previous police investigation and Jennifer Crichton was arrested but at that time it was decided by the Crown Prosecution Service there was not enough evidence to prosecute her. Following the murder of Amelia the earlier assault was reviewed and further evidence, not available to the original investigation team, was discovered. This was considered along with the supporting evidence of Amelia’s sad death and it was decided that charges could be brought and today’s conviction secured.

“My thoughts remain with the wider family of baby Amelia, and the other victim, who have been through so much over the last year. I hope that this conviction can offer them some comfort as they try to move on with their lives.

“Securing these convictions has been a great team effort from all involved and I am pleased that we have got justice for Amelia and finally for the other child after all these years.