A sapling has been planted at the site of the new West Division Police Headquarters in Blackpool as part of a tradition to bestow good luck and longevity of life to the building.

Lancashire Constabulary’s Chief Constable Andy Rhodes and Lancashire Police and Crime Commissioner Clive Grunshaw planted the evergreen tree, which was originally presented as part of the building’s topping-out ceremony in July when the building reached its maximum height.

Chief Constable Rhodes said: “This project is the biggest build ever undertaken by the Police and Crime Commissioner and Lancashire Constabulary and it is poignant that we have a symbol of the construction process as part of the new headquarters.

“The building is really starting to take shape now and the planting of this tree signifies an exciting new chapter for Lancashire Constabulary’s West Division, as we continue to work hard to consistently provide a compassionate and competent service to the communities we police.” The tree was planted at the front of the new building, close to the enquiry desk. A plaque has been erected next to the tree so officers, staff and members of the public are aware of the significance.

Police and Crime Commissioner Mr Grunshaw said: "It's exciting to see this landmark building develop and to see the opportunities the project continues to bring to the local area.

"I am looking forward to seeing the build reach its final stages and have no doubt that it will provide a fantastic base for Lancashire Constabulary's officers to serve residents in the West of the county in the future." 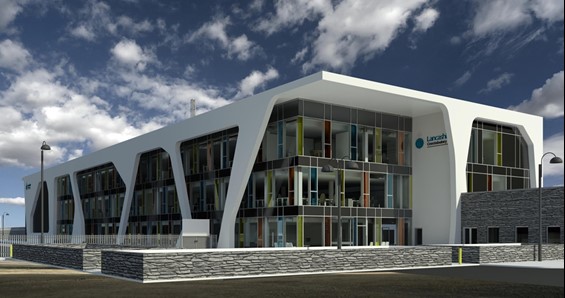 Contractors moved onto the site on Clifton Road in December 2016. The new building will replace Bonny Street Police Station when it is completed in 2018 and will serve as a headquarters for the county’s West Division, which covers Blackpool, Fylde, Wyre, Lancaster and Morecambe.

The building will provide a base for some of the local policing and response teams as well as a public enquiry desk, investigation hub and 42 custody cells. It will also house a range of specialist teams serving the whole of the division.