This year’s drink and drug campaign, in conjunction with Lancashire Road Safety Partnership, was launched on 1 December in Blackpool at St John’s Square in Blackpool. The theme was ‘Which direction will you take?’ A hearse, police car, ambulance and taxi all be lined up in the square to remind revellers of the consequences of their decisions when going out.

The festive crackdown, aims to educate drivers about the dangers of drinking and taking drugs before driving and asks them to think about how they will get home after a night out. 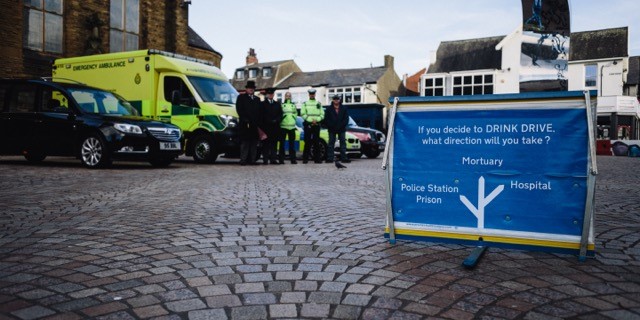 Inspector Andy Trotter said: “If you’re out partying this Christmas then please plan ahead and book a taxi, check public transport times or don’t drink. If you know of someone who is driving under the influence of drink or drugs then please do the right thing and call us on 101 or Crimestoppers anonymously before they kill themselves or somebody else. Nobody wants to end up in a police car, ambulance, or in the worst instance a hearse.”

Sector Manager for Lancashire at North West Ambulance Service, Dave Rigby said: “Ambulance staff see first-hand the devastating impact of serious road traffic collisions and the life changing injuries, not only for the victims, their family and friends but also other road users and pedestrians. People should understand the benefits of safe driving and that they have a responsibility as both a driver and a passenger to help prevent more tragedy on our roads.”

“We know that driving under the influence of drink or drugs is still an issue, particularly at this time of year. We hope by reminding people of their responsibilities to themselves and others we will reduce the number of people involved in collisions on Lancashire’s roads this festive season,” added Rhiannon Leeds, Lancashire Road Safety Partnership Coordinator.

Lancashire's Police and Crime Commissioner Clive Grunshaw added: “Christmas and the holidays are a time for people getting together and enjoying themselves, but the message is clear, don't let drink or drug driving ruin your life or anyone else’s.

"Anyone prepared to drive with drink or drugs in their system must prepare to face the consequences, with those making the choice to get behind the wheel while over the limit at night, or even the morning after, are putting themselves and everyone around them in danger.

"The launch of this year's campaign highlights that drink and drug driving will not be tolerated and the police will be out and about carrying out targeted checks to keep our roads safe this winter."